Don't tell me who to cry for

In case you haven't noticed, and I'm sure most of you haven't on account of the fact that you hardly ever look at the interwebz, a man called Steve Jobs died last week.

Of course, as is usual when someone even vaguely famous dies, Twitter, Facebook and (probably, although I wouldn't know because I just can't get the hang of it) Google + were aflame. And with Mr Jobs it was even more vehement, on account of him being basically the god of all that is normal and natural to us these days.

As an aside here, I'm really glad Twitter and Facebook weren't around when the Princess of Bulimia got into the wrong car a la Paris. That would have been irritating.

Anyway, my point is, Steve Jobs died. It's pretty fucking tragic. He was 56 and he'd been sick for a long, long time. I'm sure his money bought him the best care possible and perhaps he eked out a few more years than ordinary paupers would. But nontheless, the big C got him in the end.
And it's sad. The degree to which you were sad will, as is always the case, depend on your emotional investment in said corpse. For me, the first celebrity death that properly upset me was Freddie Mercury. I cried quite a lot.
Kurt Cobain didn't get much of a flicker of interest as I thought grunge was too mainstream at the time, plus I was 16 and so enormously self-involved that I didn't honestly notice that much. As long as it wasn't Andrew Eldtrich then I was good.

I felt bemused and isolated when old crazy Lady Di bought the farm, not because I was sad, but because everyone else seemed to go batshit mental for at least a week and I felt well left out.

Now Amy. Amy got to me. She was just too young. Obviously Kurt was as well but at the time I was 16 and he was 24, so seemed retty damn old. Amy was just 27 and as I can barely remember turning that age, she seemed like such a youngster to me. Such a waste.

I posted something or other on Facebook about it. Hey, I'm not ashamed of bandwagons if I give a shit about the cause. I was more frustrated and boggled that we can watch these damaged people implode over years and years of media coverage. It's like a long running Victorian freak show. Anyway, when I posted on the book of face, people were in agreement. You know, loads of RIPs and sadfaces. Twitter was the same.

And then it started to change.

OK, so I made the last one up. But man, it pissed me off. One tragedy does not outweigh another. It is possible to be sad about ONE thing (ie. a mentally ill girl who had a great musical talent) AND also be sad/empathetic/sympathetic towards the victims of terrorism, f'r instance.

I was reminded of this when Mr Jobs shuffled off his mortal coil. Of course it exploded across the interweb like a wildfire. Geeks everywhere hung their heads and said a little binary prayer for the late genius. But even I, as a non-techno-geek, felt a stab of sadness for one of the greatest minds of our generation. He actually did change the world and if people want to express their sadness on social freaking networking then fuck the FUCK OFF with things like this: 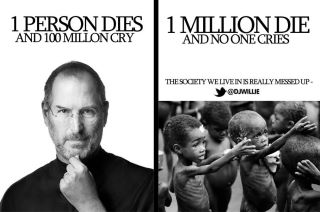 Fucking trolling, weakly reasoned bullshit. If you want attention post about your sex life. Leave the big stuff for the grown ups.

Grief (of all kinds) is ENTIRELY subjective so don't ever, ever tell me who I am allowed to cry for when they die. I'll make up my own fucking mind.

Email ThisBlogThis!Share to TwitterShare to FacebookShare to Pinterest
Labels: Death and shit