So do they know it's Christmas or what?

You know when you have one of those half-remembered whispers of a memory in your head? And over the years it crops up as part of a conversation, or a time of year? But you're never quite sure of the details? No? Well, perhaps it's just me. I have loads of them. Loads. I never know what's real and what isn't.

I was convinced for years that my dad had first got ill when I was five. I mean, totally convinced that his first heart attack was when I was five. How can you misremember that? Well, it turns out I was nine. So, go figure. I have pretty much no idea which of my childhood memories are true, accurate or I've just smooshed them in my head into something else entirely.

Anyway, I was having a conversation the other day with someone about the first single we ever bought. On vinyl it was Stupid Questions by New Model Army (for some unfeasible reason I didn't have a record player till I was about 15), and on cassette, well - and this is the weird memory - I could have sworn it was Do They Know it's Christmas? but on a computer game cassette.

This was back in the day of course. It was 1985 and as my dad worked in IT and we always had the zenith of technology at home. Which just happened to be a Commodore 64. Oh yes sirree. None of your Spectrums for us. It was Vic 20 straight onto C64. It took at least 40 minutes to load Frogger I seem to recall.

I remember playing Ghostbusters - which was awesome - and that fecking Hobbit adventure game which was really difficult. I remember my dad's friend was a local hero cos he'd finished it in three months. Well, I think I remember that. I could be completely misremembering it. Do I even exist? Descartes would say yes, just cos I'm thinking about it. But what did he know, really?

So annnnnnnnyway, to get back to the point. Tonight I was idly flicking around the music channels, just in that kind of mood. And Band Aid's original Do They Know it's Christmas? was on. So I remembered this half remembered thing and the conversation I had the other day and decided to Google it.

And behold, this is what I found: 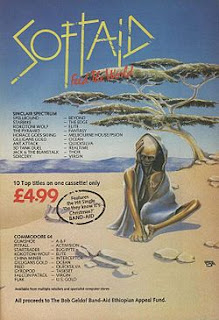 And it all fell into place. THIS was what I remembered. I wasn't going mental. I wasn't misremembering. It did exist. I didn't realise that - as Wiki now informs me - that it was the second year release for the song (I thought it was the first). I do remember that you had to quickly stick it into a regular cassette player - not the loading deck - and keep winding until you found the song.

I remember the sleeve art really clearly now I see it again.

So, for those who don't remember Softaid (I mean, how could you not? Oh, you weren't born you say? Fair enough), it was released in late 1985 by Quicksilva for the ZX Spectrum and the C64 specifically in aid of famine relief. It was very big at the time. You've probably heard of Live Aid and suchlike. And Bob Geldof. He did one decent single and then just spent the rest of the time yelling at us on TV to give our fooking money. Oh and procreating. Which we're all very thankful for. Imagine a world without Peaches Geldof.

I don't remember any of the games however. It's possible I only used it to play the song. I loved that song. Even though it took me 10 years to work out the exact lyrics.

I really like this factoid I found out while researching this post. After Do They Know It's Christmas? was released in 1984 it went straight to the top of the UK charts (a much bigger deal back then than these days. You had to sell more than 25 copies for one thing. And piracy meant recording it off the radio on a Sunday afternoon). Every week it was at number one, Top of the Pops ran the supergroup (Sting, Paul Weller blah blah, we all know who was in it) recording of them all miming their lines. All except Bono. U2 were only just getting started and they weren't deemed big enough to appear on Top of the Pops. So Paul Weller mimed his line as well.

This tickled me. Sometimes I wish we were back in the early 80s. A world where Peaches wasn't born and the world didn't know who the fuck Bono was. Happy days indeed.

Still loads of people starving in Africa though. Epic fail Sir Bob.
Posted by thereseraquin at 21:31