There should be a first for everything, at least. Apart from bestiality and paedophilia. You can leave those safely alone. If only Michael Jackson had known that. Could have saved an awful lot of bother. For Bubbles as well.

The 'first' thing I'm on about is Valentine's Day. Specifically me not caring about it. Like, genuinely not caring. This may not be a big deal to those secure individuals who genuinely couldn't give a fuck about a completely made up, commercial, soulless, empty, money making sadfest but to me it's a bit huge.

My whole life I have always been aware of V-Day looming on the horizon. At school it was always going to be the day when I would have to stoically profess myself totally fine with not having any cards, even though the kid who eats glue at the back of the class generally got one from someone. I always seemed to not get one. But it was totally fine. Completely and totally and utterly fine. I didn't want that kind of attention. It's FINE.

As I grew up and went all teenage and horrific I threw myself even harder into the I don't give a shit camp. But oh how I did. I would have loved to have had a boyfriend or someone who would have just sent me some some shit card from Woolworths. Just once.

The first Valentine gift I ever got was in my third year at University. My boyfriend at the time had a fiancee. It wasn't me. He gave me a copy of Baz Luhrman's Romeo & Juliet, apparently not appreciating the irony. It's possible he didn't know the story. He was a total douche after all.

After that there was nothing much doing. But I had an actual proper boyfriend by then. One of my own. Who I lived with and everything. I was a complete person at last. See, look here, everyone at school. I can totally attract a man. It's brilliant. I don't actually recall what kinds of things he gave me for Valentine's Day but I'm sure he probably did. I was probably so needy and desperate that he didn't dare not to.

And then the last guy, the real piece of work. Well, he has sent me roses every year for the last three years. The first year I was overwhelmed and felt so lucky and joyous and all of those things you should feel when you're with someone and you love them and they love you. He fucked someone else two weeks later. Kind of took the edge off the lovely Valentine's gift there. Funny that.

This year will be the first year I won't get anything from him and hell, does it feel good. And I do actually mean that. Keep your bullshit fake sentiment matey. I'll make do with an M&S Valentine's Day meal for two (nothing says romance more than some pre prepared chicken and a heart shaped pudding, right? I mean that's what it's all about. The fact that I saw people fighting each other with the equivalent of supermarket pitchforks to grab the last bottle of red today doesn't take the real meaning out of it at all, no siree) and split it with Fatman.

I'd rather be a cat lady than a sad lady with a dickhead for a boyfriend. Happy Valentine's Day to all the single people out there. In many ways, and on many days, we have it better. 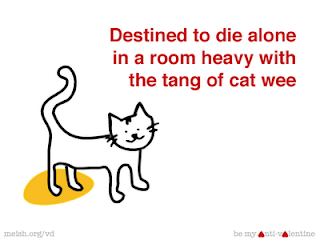