So, I'm house hunting in York. To be honest, although the locals insist York is tiny, when you don't know the city at all and all you have are your two feet, it seems rather bigger than tiny. I've criss crossed the city more than I wanted to, while at the same time failing to see many sights as I'm always intent on finding where the hell I am supposed to be.

I've now seen six places and three of them are possibilities, which is actually pretty good odds. Better than I could have hoped for. A fourth one was beautiful and ideally placed, just inside the City Walls but I'd have to sell a kidney or something to afford it. Or one of Fatman's kidneys. Oooh, there's a thought. I wonder if he can be a source of cash...

York is the closest city I've been to in England that reminds me of being in Italy. It's relatively unspoilt (relatively, although I'm sitting in a Travelodge Wetherspoons hell hole right now just to nick their WiFi but you can't have everything) and around every corner is some kind of historical wet dream. Castle walls, turrets, city walls, ancient buildings and Dick Turpin's grave. Marvellous. I keep seeing signs as well saying Celebrate York 800. That's 800 years since York was founded in its present form.

Anyway, the point of this post is this. I came out of one of the houses, which I like quite a lot actually, and just round the corner is Walmgate Bar. This is one of the towers on the City Walls. And marvellously there's a coffee shop actually IN THE GATEHOUSE. So I went in. There was free WiFi. There were also five American students lolling around, but I decided that that was OK. It's an ace place and there's tea and WiFi. Did I mention the WiFi? It was free. I like this. I ask for the password. It is: JESUS LOVES YOU. I say: "Really?" and they say: "Yes. Jesus loves you." I smiled and said thank you. I couldn't work out whether it was some kind of ironic, amusing password or for real. Either way, no matter.

So I'm working away and they're all chatting. Very, very loudly, naturally, being American and all. It's all fine. They start talking about video games and it was all very genial and lovely. I joined in at one point. Ahhh, I thought, this is how I could make friends. It'll all be fine (I have been rather panicky, truth be told).

Then they started talking about Star Trek and Zachary Quinto (who I slightly adore) and about how good he was as Spock. Again, all lovely.

American 1: "Do you struggle with gay people." Head cocked, concerned look on face.

American 2: "Well, all sin is sin, in the eyes of the lord. It's unnatural and all sinners will go to hell, so, you know, I can deal."

He said this with a straight face. Actually not a straight face. An earnest face full of righteousness. This is the guy who I was just chatting to about Elder Scrolls and Zelda. The guy who was just talking about Tron and Star Trek. I couldn't compute, even slightly. I looked at him in abject disgust. He didn't even notice, so intent was he on his conversation about gay people going to hell with the other ASSHOLE. They then started on Sheldon from The Big Bang Theory. Apparently the actor is gay.

By this point I'm burning with total fucking rage and have to try and tune them out. Last night I started reading God is Not Great by Christopher Hitchens. And his words kept flicking through my head: "Religion poisons everything."

I had to get out of there immediately. I felt itchy with disgust. I wanted to say what I thought but, just as I opened my mouth, it seemed utterly pointless. People that far gone don't fucking deserve to be approached with the dignity of logic and rationalism.

So, apparently Jesus loves you. As long as you're not gay. Or living in sin. Or black. Or a jew. Ace. Jesus you sound just PEACHY. 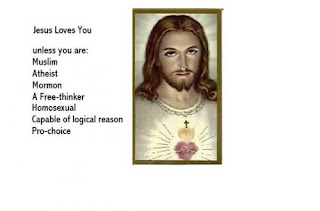 Email ThisBlogThis!Share to TwitterShare to FacebookShare to Pinterest
Labels: religion poisons everything