At work we have this thing where we decide who each other looks like. It's extremely amusing. A designer, let's call him Ricardo, has a board of lookalikes to himself. These range from Hugh Fearnley Whittingstall through the Milky Bar Kid to Jeffrey Dahmer. It's very funny.

The production manager is Geoffrey from Rainbow. Head of design is Chris from Family Guy.

I was joining in the general hilarity and then asked who I looked like.

Now I'm nothing special. This I know. In fact, I'm acutely aware that if I was about a foot taller and my face was differently shaped, then I could possibly pass as prettyish with a full face of makeup. So I wasn't exactly expecting Rachel Weisz or Scarlett Johanssen. 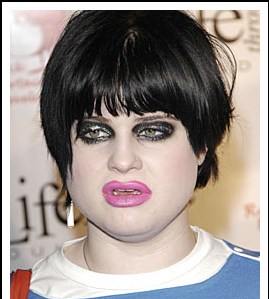 This crushed my soul.

A girl who is mostly known for being fat and has a face wider than should be humanly possible. A girl who dresses like some kind of reject from an emo convention? Really? Of all the people in all of the world, Kelly fucking Osbourne?

So there's a lesson in this. Never ever ask who you look like. Because you might just be told the truth.  Unless you already look like Angelina Jolie. You're probably safe in that case.
Posted by thereseraquin at 21:38