I was enjoying my regular massage earlier. Since I managed to land myself a job with an actual wage I've eschewed saving money in favour of buying things and having massages. I mean, you can't take it with you, can you? Best to enjoy the now rather than think about the future. I'm pretty sure that's the best way to do things anyway. I'll probably thank my younger self when I'm 80, homeless and there is no welfare system left to look after me. But for now, on with the massages.

So I go to this lass who is amazing. It's a proper deep tissue massage so it's blissfully hardcore. That sounds wrong. But oh so right.

I'm starting to drift off while listening to the music that's always played during massages. I think this is to dispell any lingering sense of awkwardness about lying face down, almost completely naked while a stranger rubs every part of you except your vajayjay.

A few weeks ago it was Enigma's Return to Innocence (remember that?) which pleasantly took me back to around 1994 and the days when I would regularly imbibe something rather stronger than prescription codeine and a gin and tonic. This week it was some classical music.

And then Barber's Adagio for Strings kicked in. If you're familiar with this music then you're probably exactly like me in that the instant you hear it you're back in 'Nam with Charlie Sheen. I have seen Platoon way too many times than is good for me and I still cry when Elias is killed. I've a vague notion that Barber wrote the Adagio in the 30s and it was probably inspired by some trauma of his own, such is the pathos and depth of emotion in the music. But for me and many others (let's face it, many others also born in the 70s) I should think it just conjures up Willem Dafoe, slow motion, dropping to his knees while a pre-mental Charlie Sheen watches from a helicopter in anguish.

I don't have much time for war films usually. Just Platoon. And Apocalypse Now. Oh, and Kelly's Heroes, The Dirty Dozen and Full Metal Jacket. So quite a few then I suppose. But mostly in that 80s gung ho YooEssAaaa style. When I started watching them I was too young to be disgusted at the USA's dodgy foreign policy and needless meddling in other countries so I kind of missed Stone's rather blatant message, I was just swept away by the emotion of it all. And the fact that everyone really suited the uniforms.

I wrote an A-level essay based on Platoon I seem to recall. I have harboured a life long crush on both Charlie Sheen and Willem Dafoe thanks to this film. And Adagio for Strings always always makes me cry. And it was the full version that played while I was being pummelled by my masseur. I wanted to ask her whether she felt the same way but one look at her young, young face, blonde highlights and fake tan told me that Platoon probably wasn't at the top of her favourite Vietnam film list.

Thankfully there was some godawful version of The Nutcracker with tinny beat behind it that sounded like it was recorded on a Casio keyboard to bring me back from 'Nam into the present.

They really need to pick something a bit less emotional for the soundtrack to my massages. Am hoping Schindler's List's soundtrack isn't on the cards for next time.

RIP Elias. You were really hot. 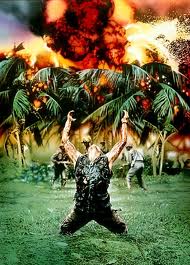