I got a feeling

Sometimes people tell me that my blogs are too harsh. That I sound too angry. That they didn't realise how passionate I was about Masterchef/the Olympics/accordionists (delete as applicable).

I mean, do you really care that much, they say? To which I would reply: sometimes yes, I do. I don't think it's necessarily a bad thing to have a passionate opinion about something. And I don't think it's a bad thing to express it. But sometimes, no. Sometimes I'm doing it for comedy effect, or at least exaggerating it for kicks. Or to amuse myself.

The Olympics blog was one such blog. And I read it (I don't read before I press publish as a general rule) and I started thinking maybe I have been too harsh. Maybe it is an event that should instil some national pride in me. Maybe I should try and join in a bit. Maybe the morals of the IOC aren't dictated by filthy lucre after all.

And then I saw this. 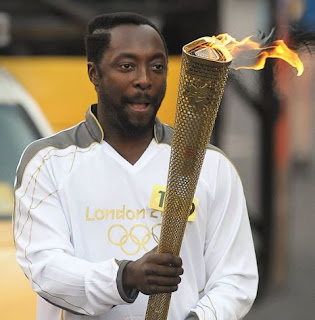 I am, of course, vaguely aware that the torch is wending its tortuous way around our fair isle, visiting places as interesting as Folkestone and Taunton. I assumed it was carried by a mixture of competition winners, athletes, ex-athletes, perhaps a high-profile British athlete (maybe David Beckham, our rentasportsceleb on the basis that he is aesthetically extremely pleasing and knows to smile a lot).

I didn't realise that the London Olympics 2012 - which I am led to believe is the most exciting thing for Britain since the first days of the glorious Empire - is being marked by a random pop singer carrying the torch.

Just to be clear. Will.i.am is
a) not an athlete
b) not British
c) responsible for introducing Fergie's voice to the world and
d) spells his name 'Will.i.am'

Two of these are good reasons to deport him, not invite him to represent a country he has no affinity with for an event he has nothing to do with.

What the living fuck? And then I realised. It's because Coca Cola sponsors the torch carrying malarkey and therefore they say who carries the torch.

For my money, this pisses all over the feel good factor of other torchbearers (I read of one 81 year old who was meant to carry the torch back in 1948 but missed it because of appendicitis and 2012 has given him his chance) That's lovely that is. I would believe in the Olympic 'spirit' if there was a bit more of that going on and a bit less of Will.I.am.

In short, I was right to despise the London 2012 Olympics and everything it stands for. Which is basically money.
﻿