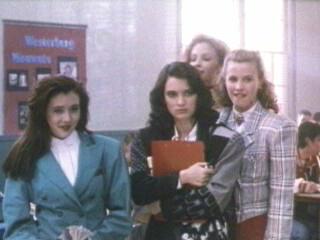 You're an American TV company. You've inherited $5 million. According to the Mayans it's the end of the world pretty soon. What do you do?

a) play croquet then eat pate with your parents before realising you're late for a funeral?
b) colour code your group of friends in order of popularity/bitchiness?
c) adapt the best high school movie ever into a TV series for Bravo?

If you've never seen Heathers then you're dead to me. Seriously. You don't know anything and shouldn't be allowed to live.

Heathers is the best film of the 80s, bar none. It starred Christian Slater (doing his very best Jack Nicholson impression) as psychotic but oh so sexy rebel-with-access-to-too-many-guns JD and Winona Ryder as the sell out Veronica Sawyer who traded her integrity, sense of self and dignity to hang out with the popular clique at high school. Comprising Heather, Heather and Heather, the trio make Mean Girls look like flower fairies and preside over a complex regime of bullying and power games.

Veronica and JD decide to put an end to their reign of terror by faking a couple of murders. Although, it turns out JD is an actual psycho and Veronica gets dragged into an unwitting killing spree that ends up with suicide being venerated as cool by the collection of drones and geeks at Westerburg High.

It's not subtle, it's very dark and it only has a semi happy ending and it taught me more about life and how to live it than anything else in the late 80s. Course, I'm not exactly a well adjusted adult so I'm not sure what that says about anything. But this is how teen films should be made, they should be full of horror and humour. Sadly they all seem to be a pile of shit starring Lindsay Lohan these days.

I'm not sure what kind of series will come out of this. If they stick to the heart of the original and get the casting right, it could be Very.