The kid who sat at the back and ate glue

So I was flicking through my copy of The Guide, in between bouts of heaving and paroxysms of shivering.

In passing I noticed the new advert for Topman's autumn/winter collection. 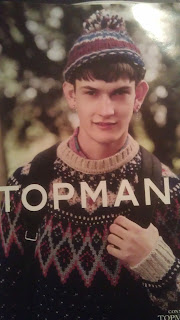 I know I'm cracking on. I know that I'm pretty much passed the age of understanding the yoof of today. I know all that. But for Christ's sake. Look at him. Just LOOK at him. He looks like the special kid in school who smelled of off milk and couldn't form words properly. He's dressed like a four year old in the winter of 1980. He has a glint in his eye that suggests that you wouldn't want to leave him with access to your knife collection and your pets and/or children.

He looks like the care in the community lad that my ex boyfriend used to look after. He is dressed in the same clothes of my very young days - and even we knew we looked crap. Who puts this shit together? Is this really what the hip young man aspires to these days? Actually, it's occurred to me I don't even know what age range Topman goes for - is it the same as with women? Actually aimed at teenagers but also seen on anyone up to the age of 50-odd? Does this mean this season I will be seeing plenty of bejewelled specials with bowl hair cuts dressed like Where's Wally?

Excellent. Looking forward to it.