On my way back from an enlightening three hours with a load of Buddhist monks I stumbled across this: 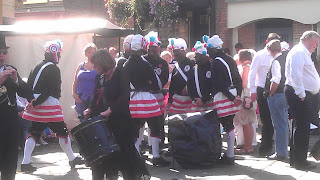 Surrounding these men who appeared to be dressed as, well, that, were an audience of people dressed like this: 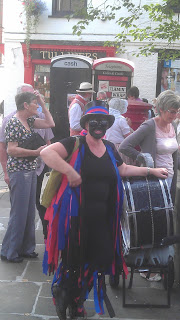 The strange guys dressed in approximations of Swiss Guard uniforms were doing some kind of, well I can only assume it was due to the proliferation of bells and sticks, Morris dancing. While dressed like clowns. With blackened faces.

In among the people with blacked up faces, and I can't emphasise that aspect of this enough, were a lot of very confused tourists. Actually, I think the native York people were more confused than the tourists. I overheard some American guy authoritatively tell his wife that this is "English Morris dancing and that it's based on the Black and White Minstrels".

I saw some German people looking aghast at the whole spectacle. And then the English people in among the crowds were sort of shifting about and trying to look like yes, old English traditions totally do include people blacking up and hitting each other with sticks. That's totally normal and we're fiiiiine with it.

Something like 7 gazillion tourists come to York every year. They come to soak up the history that permeates this ancient city. They come to experience the Walls, the Minster, the museums, the viking heritage, the sheer beauty of the Museum Gardens and the ancient buildings dotted around. They come to go to the Races and take the opportunity to anoint themselves in several layers of fake tan, wear a Topshop prom dress, six inch heels and puke their vino over Mickelgate Bar. They come to wander along the Shambles, all the while looking up and walking very very slowly, ignoring the people who are just trying to get home.

And now they come to witness the Great British tradition of men in skirts with blacked up faces and bells on their legs whacking each other with sticks while shouting OY a lot.

I wonder if any of them actually come back.

A quick Google uncovers them as a group called The Britannia Coco-nut Dancers. Oh dear lord.
They come from a small town near Rochdale (my place of birth as it goes) and apparently perform folk dances. Unsurprisingly the origins of their blackened faces are lost in the convenient misty mists of time, but it's thought that perhaps it is a pagan tradition to hide the dancers from being recognised by evil spirits. Riiiiight. Another theory is that the dances originate from Moorish pirates who apparently settled in Cornwall. Which obviously explains why they come from Rochdale. That clears that right up then.