I don't have much time. I am in the middle of packing hell. I move house at 8am tomorrow morning. I shouldn't be here doing this. But a friend of mine just sent me something that I can't just not comment on. If I didn't give voice to my apoplectic rage I wouldn't be able to sleep tonight and then the knock on effect would be terrible to behold and may result in dead estate agents. And none of us want that now do we.

Anyway. This. This. THIS 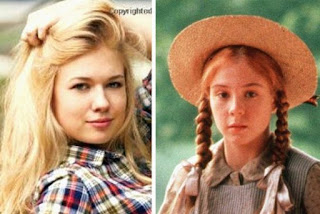 On the right you will see Megan Follows as Anne Shirley, from the 1980s Canadian TV mini series. This series introduced a generation of people to Anne of Green Gables. NOT ME. By the time this had come out I had already read and reread and REREAD all nine of the books in the series.

I loved Anne. I wanted to be Anne. I frequently pretended I was Anne. I know the plot of every book. I can quote dialogue. These books were my life for a while during a particularly shit time at school.

So I can tell you categorically, with authority that the main thing - the main, DEFINING characteristic of Anne Shirley's appearance, particularly in the first book is that she is GINGER. She is skinny and ginger and 'homely'. Obviously she grows up into a beautiful swan and gets the boy. But at the beginning she she is a child of 11 who is not meant to be a conventional 'looker'. She is also not a pouty, blonde FOOL in a fucking checked shirt. She does not give come hither glances and look like she might just be old enough to have sex with you.

The plot, you see, is her coming of age story. Part of that is coming to terms with who she is. But more importantly, the entire reason that her future husband gets her attention at school is by teasing her about her ginger hair. He calls her carrots. She punches him in the face (kind of), and refuses to speak to him for four years and he is lovestruck from afar. It's the whole damn point. What would Miss Playboy bunny on the left here do? Most likely drop to her knees and service Gilbert Blythe and the rest of the schoolhouse by the looks of her.

Anne Shirley is an iconic heroine for young girls with soul, and I'm assuming there are some left in existence. She's an inspiration for girls who feel wrong, and gawky and like they don't fit in and she gives hope to them that being intelligent and feisty and kind and clever outweighs looks every time. She's a feminist and a wit and changes her world. What she doesn't do is pout at boys and run her hands through her luscious blonde hair.

So why in HELL this US reprint of the books has gone with this image I don't know. But I hate them for it.
Posted by thereseraquin at 21:45