Taking the lid off...

This is what happened in York yesterday. Sort of. Without the huge, flat dynamic vista. Sort of like this on a smaller scale, with lots of old buildings interspersed with inexplicably shoddy 60s architecture. But looking up was essentially like this. 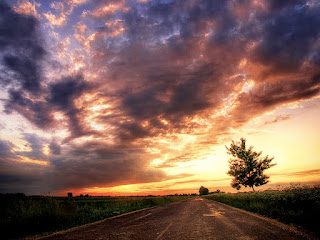 Because, well... you just don't understand what it's been like. You weren't there. Unless you were. And also I do concede that we haven't exactly had the monopoly on shitty weather. But fuck it. My blog.

For weeks and weeks and weeks, York has been like living in a tupperware box. You look up and it's opaque dirty white. You look around and it's opaque dirty white. You breathe in and it even tastes dirty white. I've never actually felt oppressed by clouds before. And I'm usually used to being able to look into the sky at any time of year and being able to discern something. The outline of clouds maybe. Or a tiny bit of lighter clouds that suggest that there is a sun somewhere. But there's just been nothing. Just waking up to a matte grey block of sky that stays like that until it gets dark. No outlines of anything else. No stars at night. Just... nothing... like the apocalypse had already happened and this actually was a nuclear winter but someone had forgotten to tell York.

And I like winter. I like dark nights and dark mornings. But the unrelenting greyness and lacerating wind, combined with spending most of the last few weeks standing on the edges of the barren wasteland that is York University's Heslington East campus waiting for a fucking bus that NEVER COMES has scarred me. And you know how I don't like to be overly dramatic. But, really. I'm possibly scarred for life.

Stepping out of the building I work in [called The Catalyst. Inexplicably grey and lime green. Shaped like what the 1970s thought the future would look like. With an Ikea twist. Hideous.] every day has been like being smacked in the face with a slab of concrete made of icicles and needles. Repeatedly. One memorable evening's journey home took two hours amid conditions that would cause Sir Ranulph to cry a bit as he loses whatever digits he has remaining.

And then yesterday. Yesterday it was like someone took the lid off the tupperware box and radiance poured out. The transformative effect of sunlight is only really dawning on me now. At my age. It's taken me 37 years to understand why people like sunshine? What the motherflip is wrong with me?

I'm a goth type. I genuinely spent most of the 90s and 00s inside with the curtains closed wondering why people were so fucking nauseating during the summer time. And I still don't like everything that comes with it. The sudden desire to play frisbee and football like we're all living in some awful American frat house comedy film. The stripping off as SOON as is humanly possible to show off one's arse/pecs/endless tattoos.

So waking up to a world bathed in oranges and yellows and sparkliness and warmth and a fat cat gazing rapturously out of the window while rolling his girth around in an actual sunbeam has been a fucking pleasure. And then it happened again today. And suddenly waiting for a bus is fine. Because I can turn my face to the sun and close my eyes.