"Welcome to this garden of death..." 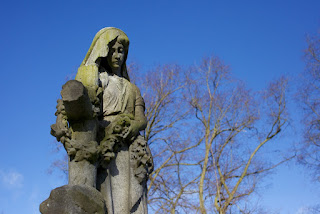 I recently spent an extremely pleasurable time in and underneath York Cemetery.

Yeah, yeah, I know. How predictable that I'd want to go and hang out in a cemetery, right? To be fair, the catacombs were substantially warmer than my flat has been since New Year. It's now Day 41 with no hot water and heating. So used to this ridiculous state of affairs have I grown, it just feels like I've always lived like this. Cold, cold, cold. So a wee break in an underground graveyard seemed just the thing to warm myself up. I'll be like some kind of post apocalyptic refugee, eyes wide with wonder, when I move into my new flat this weekend and witness the miracle of a tap turning on and hot water emerging.

Anyway, I'm volunteering there now, which means spending a day a month artfully arranging brambles and clearing ditches and generally making sure the dead have a nice place to hang out. Having a proper nose around seemed an apt way to spend a day.

And it's even more perfect a space than I thought. It's the story of 125,000 people, how they were all but forgotten and, thanks to a group of people who care, brought out of the shadows to their rightful place in a beautiful, wild place of mourning and acknowledgement. Thanks to the Friends of York Cemetery and the Trust that formed in the 80s to drag the graveyard out of the maw of bureaucratic ignorance it had fallen, 125,000 people have been brought back to life. As much as they can, given that they're all dead, of course. But you get the gist. 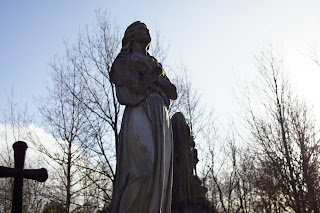 I wrote an article about it for One&Other, which you can check out if you'd like to know more about some of the logistics of bringing a graveyard back to life, like a black clad phoenix from the flames of indifference that sadly was a marker of much of the late 20th century towards death. 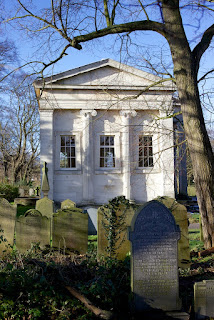 It's the Victorian attitude I'm into. The loud acknowledgement. The clothes, the rituals, the funerals, the ornate burials, the graveyards that were their cities of the dead, the Memento Mori, the locks of hair, the jet jewellery, the steadfast refusal to pretend that the second someone dies it's possible to just get over it.

The comfort in those rituals I can only imagine, having had a rather different experience with loss and society's attitude towards it. And, I should add, that the Victorian mourning rituals were carefully timed, they did not go on forever (unless you were Queen Victoria who was a bit mental, and let's face it, there was only one of her); mourning dress changed over the months, denoting how long since the loss it had been, eventually to fade into almost the background, allowing people to get remarried should they wish, or move on.

Death was everywhere in Victorian Britain - it was literally in the midst of life. But all the rest of the time people were living and breathing and laughing and fucking and having children and getting on with their lives, whether they were rich or poor or in between. Wars were fought and epidemics happened but nothing could have prepared Britain for the shock of living in a world between 1914-1918 where almost an entire generation of men and boys were killed.

There was no time for mourning customs, no time for publicly acknowledged grief and, more often than not, no body to bury. How that must have changed everything. A brief lull and yet more mass slaughter in World War 2.

It's little wonder that post WWII burying the dead became an entirely different matter altogether, along with society's attitude towards it. But another 50 years on and we're stuck in a hinterland of bizarreness when someone dies.

A sort of embarrassed sidelong look, a quick visit to the local crematorium, pick a coffin out of a book and away you go. Bosh. What the fook was that, you may say, glancing around in bewilderment. That was it, says society, you've got to just get on with it now. Don't mention it much because people will think you're weird. Don't cry about it in public after the first couple of months because people will think you're maudlin. Best just, y'know, get ON with it.

Give me the Victorian attitude any day.

Also, them clothes. Who wouldn't want to mourn in a bustle?