It isn't. It's an incredibly short story. And it goes thusly.

Earlier I was messaged by a young man on OK Lupus. I didn't actually notice how young he was because I was rather distracted by his picture, which is this: 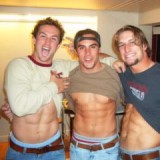 I asked him which one he is. He said the one on the left. I stared at his abs for a bit. We chatted. Well, I say chatted. I had to decipher his textspeak, but we managed. He kept saying how hot he finds older women and that he just wants to settle down. I'm sorry but sometimes I'm shallow, OK? I thought, ah well, not to worry, I can teach him how to read, write and spell later. Let's just meet up first. And maybe he'll let me stroke his abs.

He nags me for my number. I say no. I said: "If you really are the guy in the picture then you'll be scraping women off you on a daily basis."

Yes, folks. The penny had started to drop in my sex starved brain. But wait. He says that he will prove who he is by sending me pictures. OK, I say. You do that. He does. Thankfully it was just a shot of him bare chested, rather than a dick picture (I really hate those. Guys, there is NOTHING attractive about a picture of a cock. Just don't send them anywhere, ever.)

So the picture is of a young man with nice abs. But it's manifestly not the same guy. I drop the original picture of the three guys into Google and it's all over the web like a tramp on chips. He's lifted it from Men's Health but then sent me a picture of his real self. Did he think I wouldn't notice? I mean, what's the point? If, god forbid, we had got as far as meeting then how would he explain it then? Would he think it wouldn't matter? I mean, what is going ON here?

I should have known by the very Abercrombie & Fitch vibe in that picture. I mean, they're clearly American. They're all white teeth and six packs. They are not Craig from Catford. Or whoever he really is.

While my abdomen-licking fantasies crashed down around me, I started to see the amusing side. I asked him what the hell.

It's not though, is it? It's really short.