What is it exactly that's putting you off?

I made a resolution that I was going to stop sharing dating site stories on this blog because they must be repetitive for the reader. And I also don't want to put any hopeful single person off. I mean, just because I have the luck of the damned on internet dating doesn't mean everyone will. I do still know loads of people who have met their other - and in some cases, far better - half online.

But as we know by now I am finding it more of a long lasting and disgustingly fascinating experimental thing. It's sort of like watching a slow motion car crash that transcends time and space. It forms a distraction from my endless work - have I mentioned that in addition to my full time job I'm now doing part time freelancing, which is great but it genuinely means I'm writing 80% + of the time I'm not asleep? And I'm just about to start a novel writing course as well, so I can fill that remaining 20% right up. But I need distractions every now and again, which is where Reddit and OK Stupid come in.

So, basically, I broke my resolution. Much like all of my other resolutions. I pretty much only make them to break them.

And the other night I was idly flicking through when I saw a profile picture that took my fancy. He looked quite hot (as much as one can tell from a tiny picture) and he lives in Leeds and he seemed pretty amusing and could spell. This is basically my entire criteria when browsing OKC profiles. And I'm increasingly flexible on things like distance - I've had some lovely chats with men in New York and California and Australia - just about the right distance for the kind of relationship I want to have, to be fair.

So I messaged this guy. He messaged back. We began some mild flirting. I made a cup of tea. We carried on with a bit more flirting. Nothing heavy, just pleasant.

And then he said: "I should tell you something, but you'll judge me for it."

And I said: "Are you separated?"

He blethered on about how apparently his wife is just fine with it, even though she doesn't know about it and he won't tell her. But she's pretty much totally fine with him doing what he wants. I mean, not to the extent that she'd ever find out or anything, and, really, he just wants to find that missing spark. He wants to have some fun. He thinks he deserves to have some fun and he'll never leave her and of course he loves her but he just, you know, needs to spend 'time' with other women to fulfill that part of his life. In fact, he said, he thought it would help his marriage because, and this is clearly the most important thing, he would feel happier and therefore would be nicer to his wife.

I said nah, you're alright mate and went to bed to watch Jonathan Creek (do NOT judge me until you've watched it, it's marvellous).

And then last night he cropped up on the chat thing. Despite the fact that I had extremely clearly said that I didn't want to meet him and wasn't into it, here he was again. And here it is (I'm white, he's green). His "yes, we did" is in response to me saying: "I'm pretty sure we discussed the fact that I'm not going to meet up with you last night" 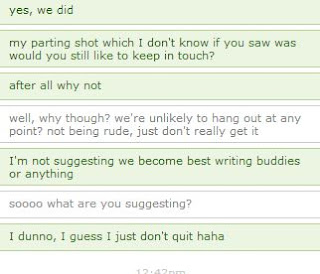 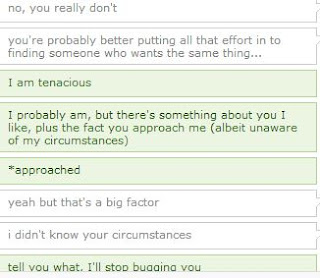 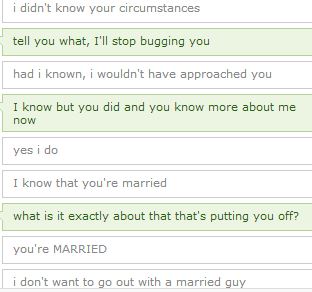 Let's just go through that last panel one more time. He seems to think the fact that I messaged him first negates EVERYTHING else I said in our first conversation. And he also seemed to think that the fact that subsequent to approaching him first, and his later disclosure regarding the facts, vis a vis that he is married, had changed nothing. WHAT IS IT EXACTLY THAT'S PUTTING YOU OFF? he sez.