You may have seen this amazing advert recently. And if you haven't you should. It's lovely. Easily one of my favourite commercials ever.

Watch it here if you haven't already

There's only one thing wrong with it in my mind. The fact that it's for O2. The same O2 that has had me tied in to the wankiest phone contract known to man. It's been 20 months already and it will still cost me something mental like £200 to get out of it early. The crappy HTC handset hasn't worked since about month six of said crappy contract and any attempt to get any kind of help has gone down like a shit in a swimming pool.

I gave up a while ago and just bought a crappy phone that can't even receive picture messages and use that instead.

It's also the same O2 that sold me broadband on a very good deal approximately six weeks before announcing to customers that actually they'd gone and sold it to SKY, so now I have SKY broadband at a higher price.

Basically O2 are a big bag of shite. But they do do a good advert. And they're very attentive on Twitter. Complete with emoticons. 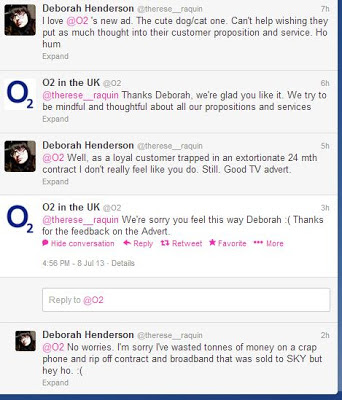 I sort of love the way brands have harnessed the power of social media to effectively go "meh" at their customers in a new and different way.
Posted by thereseraquin at 20:34