When did rape get funny?

Recently I've noticed a certain, er, let's call it a phenomenon. Of male fuckwittage. It seems to be a 'thing' right now to make a lot of rape 'jokes' on social media or just in normal conversation. Or not even jokes, I don't know what you should call them. On OK Cuntpid I have noticed this too.

Not sure if you recall this post Penis Envy but you'll notice that the nice man at the end of it asks me whether I've had ever had sex that isn't forced. Because I didn't want to dirty skype his perverted ass.

And then this guy happened: 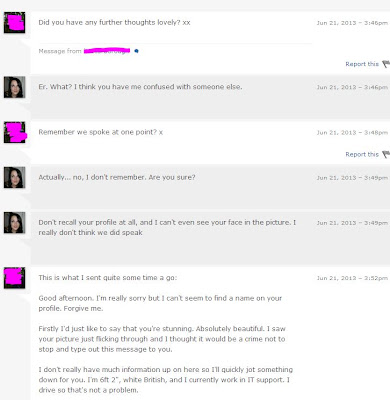 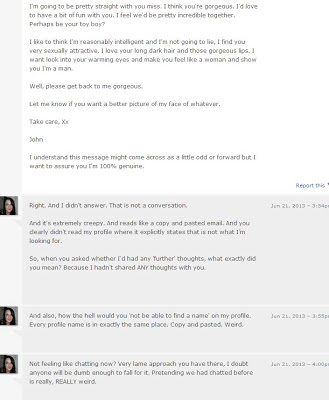 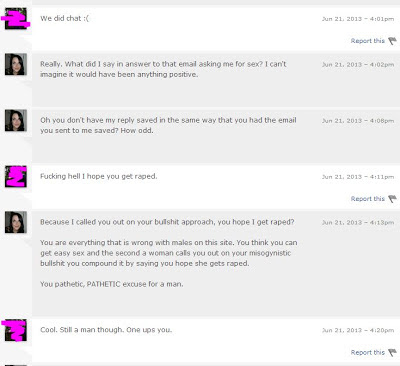 And yes, I shouldn't have indulged his fuckknuckle approach but I snapped. We have never spoken. He never sent me that message. If he had I would have told him to fuck off. But he persists in saying we had spoken, complete with sad faces because nothing turns a woman on than emoticons, boys, nothing.

And then, when I call him out, just straight out and tell him why he says that I deserve to get raped. This is some grade a cuntdom in this email. All of it, from the copied and pasted post, the attempted guilt tripping, the lies, oh, and the rape threat.

But that's online dating for you, right? Doesn't happen with people you know. No one you know would joke about rape, right? Wrong as it turns out.

The other day a guy I have met a couple of times around York, one of those not a friend but have many friends in common and, hell, when you're trying to make new friends in a new town you tend to just get on with whoever. An acquaintance if you will. Who decided to make a (what I've come to realise) typically attention and reaction seeking status update. It was something about how he doesn't like Rihanna's new song so no one should and any girl dancing to it deserves to be raped.

Let's ignore for one moment a grown man in his 30s being apparently annoyed enough by popular music to repeatedly post that he thinks people who listen to it are lame. Yes, in his THIRTIES. Not in his teens. Let's just ignore that, cos you know, whatevs. If it makes you feel special to feel like you're the only one who truly 'get's the majesty of particular forms of cockrock, you know, carry on. No one gives a shit.

But don't make a casual 'joke' about rape. Just don't. Naturally, although I know that all he wanted was attention and I was just about to give him plenty, I couldn't help it. I just had to wade in and call him out for being a fucking dick. Which, naturally, led to quite a few posts (by men) telling me to lighten up, it's just his dark sense of humour that I don't get, that he's a really nice guy, yada yada yada.

That's not what's happening here. What is happening here is an ignorant dickhead casually condoning violence against all women. That's all women. Including his mother, his girlfriend, his sister. That's what it means when you joke about something like rape. You are adding to a culture that is going backwards with its treatment of women at an intrinsic and dangerous level. YOU are adding to this.

And heaven forbid you, as a woman, should stand up and say something. Because girls, you should
LIGHTEN THE FUCK UP when someone you know makes a casual joke about rape on Facebook. Don't point out what an utter fucking moron he is. It's funnnnnneeee. Isn't it? I mean, what isn't funny about rape after all. It's a legitimate reason to have a laff. Innit?

Casual acceptance of rape is NOT OK. It's NEVER OK. And it doesn't show some kind of deep, intellectual sense of humour that only special people can understand. It makes you an ignorant, worse actually, a wilfully ignorant bystander.

When I did bite back, many people - all men - told me to 'calm down', 'chill out', 'stop taking it so seriously' and a lot of other stuff that was way more offensive. Calm down. That's the response for a woman openly being offended by a rape joke. CALM DOWN YOU WIMMIN. It's FUNNEE.

It's not funny. You're a fucking adult. You shouldn't need this explaining. How can I even start to try and explain why it's not OK to say that a girl deserves to get raped if she listens to a song you don't like? How can I even begin to break down everything that is wrong with that statement - from the fact that you think it's funny, to the fact that you're clearly posting it for attention and you have no interest in the damage you are perpetrating. Yes, you. With your stupid Facebook status. You are a part of a problem that is bigger than you can get your tiny braincell around. But as long as your mates think you're cool on social media, it's all worth it, right?