You know those quotes or sayings that certain types of people share on Facebook, along with a: "lol, so tru"?

I fucking hate them.

I hate the cancer ones and the ones with 'sad' stories and the ones that are meant to be inspiring or uplifting but are just generally a hackneyed quote from a random superimposed over a picture.

But I hate the ones about being a woman the most.

Look at this for a prime example: 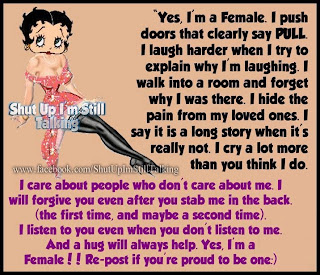 What is this inane fucking drivel? And why do I see people sharing and liking this grotesque shite?

Apparently, according to this, a woman is someone who is too stupid, needy, passive aggressive, a victim and a doormat. And is proud to be all of this. This is presented as if these traits are something women should aspire to. 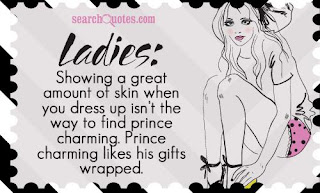 Patronising patriarchal BULLSHIT. Wear whatever the fuck you want. Your job in life as a woman is not to package yourself in the 'correct' way to attract your 'prince charming'. Apoplectic with rage this makes me. Even worse is that this is part of that slut shaming thing, that horrible controlling crap that is spouted by women and men to make women uncomfortable with their choices. Fuck OFF. And since when is a woman a 'gift' for some dude to 'unwrap'. What is this?

And then there are these ones: 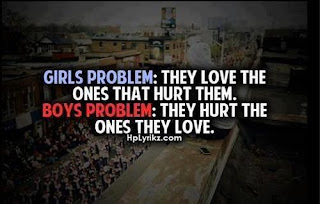 Still peddling the idea that is central to nearly every romantic comedy out there. A woman should expect to be hurt by a man and will, naturally, continue loving schmucky mcschmukerson because she has a vagina and is therefore incapable of rational thought. And boys, well, they just treat women like shit because they love them. They just can't help it. Because they're from Mars. They just can't help themselves. All boys hurt the girls they love and all girls love the ones that hurt them.

Fuck the fuck off. Seriously. Take this hackneyed, outdated, mysoginistic, misandric SHIT and stick it up your arse. Whoever you are who bothered to put this toss together.

Oh, and this one? Whoever put this one together I do wish I could put my fist in your face. 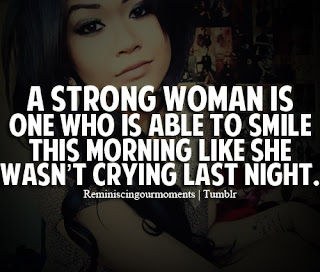 No. No. NO. That is not the definition of a 'strong woman'. What is with this insistence that women apparently spend most of their time crying and 'needing to hide their tears'?

The worst thing - the very worst thing - about these trite bullshitty quotes is that they are meant to be showing strong women. People sharing them seem to think they are being all 'girl power', while at the same time perpetuating the fucking baseless nonsense that our current media appears to have about men and women.

How about this from a woman who wrote in the first half of the 19th century. A woman who fought for the right to write in her own name. A woman who pushed against the sphere she was born for. A woman, who along with her extraordinary sisters, did more for advancing the perception of women as intellectuals than almost anyone else of her time (if one considers the longevity and enduring popularity of their works). Charlotte Bronte wrote this in 1847, in Jane Eyre's voice:

“It is in vain to say human beings ought to be satisfied with tranquility: they must have action; and they will make it if they cannot find it. Millions are condemned to a stiller doom than mine, and millions are in silent revolt against their lot. Nobody knows how many rebellions besides political rebellions ferment in the masses of life which people earth. Women are supposed to be very calm generally: but women feel just as men feel; they need exercise for their faculties, and a field for their efforts, as much as their brothers do; they suffer from too rigid a restraint, to absolute a stagnation, precisely as men would suffer; and it is narrow-minded in their more privileged fellow-creatures to say that they ought to confine themselves to making puddings and knitting stockings, to playing on the piano and embroidering bags. It is thoughtless to condemn them, or laugh at them, if they seek to do more or learn more than custom has pronounced necessary for their sex.”

Why is that I have to look to the past to find a message of strength? Why do I have to look back to Plath and Woolf and the Brontes and Steinem? Where are the messages now? In the voices of young women in 2013? Women who are living IN the future, yet are expected apparently to go backwards?