Apparently I don't understand my own sexuality

Today I had a message on OK fuckwits. Nothing new there. But this was from a girl.

This actually happens every now and again, a gay lady will send me a message and say something nice, I will say thanks but I'm straight and they say something along the lines of yes I know just wanted to say you're pretty or something and then it's done.

I wanted to be polite. She's a 23 year old from Leeds who said something nice and I said thanks. And then this happened. She is clearly on a mission to turn straight women gay.

She was pushy, insistent, entitled and creepy. All of which I have come to be very familiar with from men on OK Cupid, but apparently this attitude has nothing to do with the fact they're men.

It's just people being dicks.

Maybe she's right though. If you follow her impeccable student logic in the last part, clearly I AM ACTUALLY GAY and JUST DIDN'T KNOW IT. If only I was as intelligent and self aware as she is.

Anyway it doesn't matter because no one will want to be with me anyway with my attitude. According to the girl who tells complete strangers that they don't understand their own sexuality.

If I had the energy I would bang my head against my desk. Also if I had a desk. 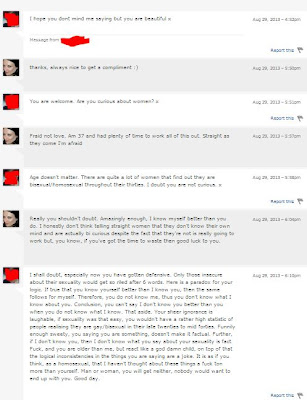