In my last OKC blogpost, this dude was featured: 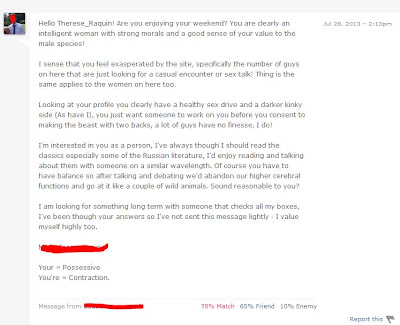 He was the one who apparently thought by telling me he hasn't actually read any of the stuff I'm interested in, he will so that we can talk about it and then (excuse me, just puking) go at it like a 'couple of wild animals'. He also noted that I have a 'good sense of my value to the male species'. Such high praise. He kindly mentions I have a 'kinky side' (don't be alarmed mother, OKC asks everyone a vast range of inane questions and then extrapolates nonsensical crap from them. Suitors can look through your answers if they so wish. Apparently this one wished) and assures me that he understands that all I need is 'someone to work on me' before I will spread my legs.

Lovely. Such insight. Such charm. This guy, I thought to myself, this guy knows women.

He kept visiting and visiting, so I thought I would honour his post with a reply:

I love his use of the word 'indomitable'. He is stronger than me. He has not yet 'given up, accepted defeat' and has 'been through a lot.' Such bravery. And then he orders me to explain. So I do. I thought I best not risk being ambiguous:

He didn't like this. One little bit. I can tell because he wrote a gazillion word email about it: 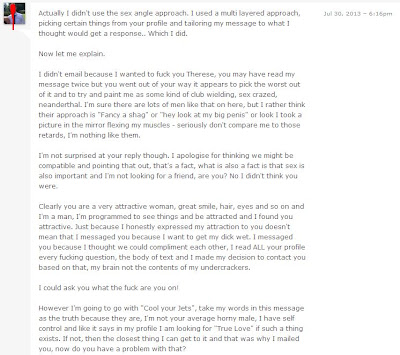 He seemed to have forgotten his original email, so I thought I'd remind him of all the inappropriate and icky sex stuff:

And then this happened. I'm warning you now, he goes on. A lot. Because I have now 'made him angry'. 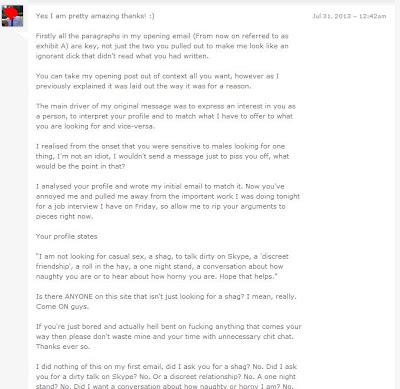 I'd particularly like to draw your attention to the sixth paragraph above. That's the one where he says: 'Now you've annoyed me and pulled me away from the important work I was doing tonight...'.

But wait while he rips my arguments to shreds: 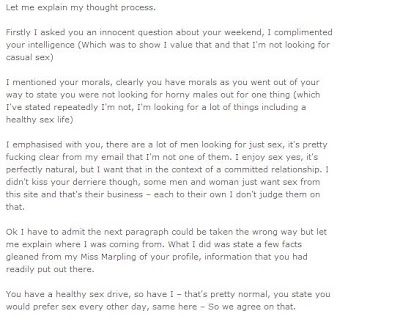 I got a bit bored here and my eyes glazed over. I've split this behemoth of a reply into a few chunks so you can have a breather in between. So far we've gleaned that although he mentions sex pretty much every second word, he's not actually interested in the sex. I mean, he enjoys it, that's only natural. And he is very very non judgemental. Which is good to know when you're being harangued by a stranger, that said stranger just doesn't judge. 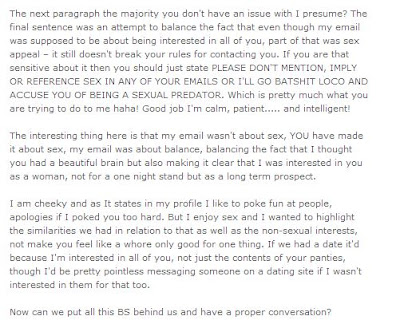 So here he says that I am 'batshit loco' and have accused him of being a 'sexual predator'. Um. I don't remember that bit. But OK. He then explains that he is 'cheeky' and then It suggests we have a 'proper conversation'.

But he forgot something:

I don't know why but it really tickled me that he had spent hours (when he should have been preparing for a job interview, no less) replying to me because I had angered him, without even considering whether I would want to 'make the beast with two backs' with him even if he did eventually get round to reading Tolstoy.

It didn't tickle him. But it's OK because he'd already decided (while writing that opus) that he wasn't interested anyway. Actually. Yeah? Not even a bit. I mean, it's all about the interpretation of his email and I did that wrong. Even though I read the words he wrote, it was clearly my way of interpreting it. Natch. And then he actually said: 'takes one to know one'. I was gleeful. 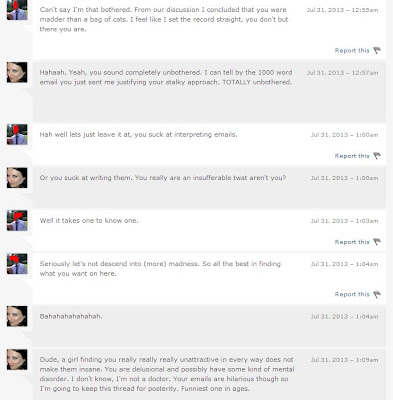