How am I racist?

Well, because of the racist things you do, say and think. That's how.

Of whom do I speak? Of this twatburger, that's who. 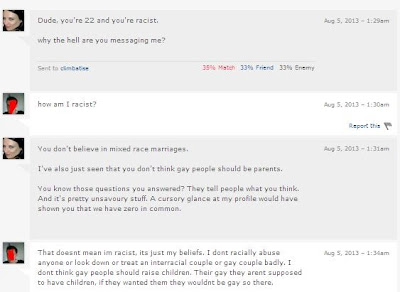 Standard dufus messaged me just now. I was on my way to bed having hammered through some work but I have also hammered through a shit tonne of coffee thanks to my lovely new AeroPress and now I am wired. Tired but wired. You know? Like when you close your eyes but they just ping open regardless of how much you command them not to. Wired tired. Tired wired. It's likely this post will be lacking in coherence, by the way.

BUT the important thing is, not only is this dude 15 years younger than me, he's also a little bit racist. Well, quite a lot actually. And for good measure he doesn't think gay people should be able to have children.

Once you hear his rationale though, you can see how he could persuade you to change your mind. I mean he says he's not racist, he just has racist beliefs. So that doesn't make him actually racist. You know, it's just what he thinks and stuff about people.

And gay people are gay and if they wanted children they wouldn't be gay. DUHHHHHHHHHHHHH.

It's all so simple now.