How naked do you need to go?

The other night the VMAs happened. And such is the objectification of women and the collusion of female artists to get their tats out in order to get noticed there was an enormous amount of flesh on show.

From the sheer dresses on the red carpet to the fact that Lady Gaga turned up in a thong. How low does your self esteem need to be to turn up to an awards show wearing a fucking thong? I know she's out to 'shock' and I know that her shtick is to 'provocatively' draw attention to herself because her image is crafted on a pseudo performance arty thing, but it's clear she's running out of ideas. Fast. Her performance rolled through her usual imagery of nuns and death and sex and masturbation and all of that malarkey. But we've seen it all before. Over and over again.

Everyone gets naked now.

Do you remember the days when Britney wearing a very obviously non see through body stocking that sort of could have looked like she was naked-ish from a great distance was a thing? Or when American went collectively mental at the sight of Janet Jackson's purposeful nip slip at the Super Bowl? Or Madonna singing a song about, gasp, virgins?

Somewhere during the last few years it seems desensitisation to tits and ass have become ubiqutous. I'm not going to turn this post into (much of) a feminist rant because it's important to distinguish that, yes, people have the right to wear what they want. And is performing in your underwear any worse than watching swimmers or gymnasts at the Oympics, for example? Small clothes and the female body provokes reaction. Athletes dress like that in order to not impede their movements and, this is definitely also true, to look good.

But what's with female artists feeling like they need to go out in a just a thong? Empowered or desperate? Striking a blow for the female right to wear tiny bits of fabric in public or giving in to the age old patriarchal truism that 'sex sells'? The question would be, I guess, is Lady Gaga wearing a thong and flashing her ass at the camera 'accidentally' for herself or for others?

Hard to say, of course, I'm not in her head. Maybe she is empowering women to be brave with their choices.

Here she is terrifying the 1D man children. 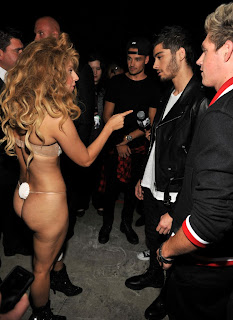 During the same show Katy Perry appeared almost nunlike in her crop top and shorts, but no one can actually remember her performance because of something else. What was it? Well, it was Billy Ray Cyrus's birthday. Maybe it was that? Or maybe it was that his barely legal daughter catastrophically embarrassed herself, her family and the world with a 'raunchy' performance that was honestly too cringey to actually be offensive.

She flailed. She danced (badly) with some depressed teddy bears. She wore a skimpy costumer, presumably designed to appeal to the furries out there, only to rip it off and show some latex underwear that, oh lord, just looked painful. I mean, it was a size too small and was WEDGED right up there. 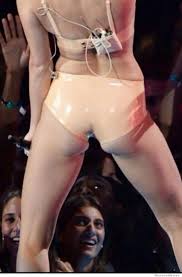 Her tongue was hanging out like a particularly thirsty dog. Every time she forgot to have her tongue lolling she remembered and quickly stuck it out again. Someone must have once told her that ladies who do things with their tongue are sexy. She did this, like, ALL the time. 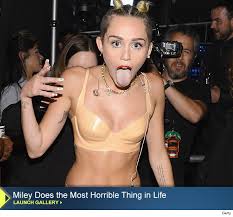 And the internet went wild. I am a bit sketchy about Miley, I know she was in Hannah Montana and I know that she was a child star and I think she's now around 16? I'm assuming she's legal anyway. She seems to be some kind of Disney iconic princess type person that we just don't have in England, but it's fun to watch America become disgusted and 'shocked' and go on a morality crusade every time one of these damaged, fucked up little girls displays signs of an emotionally poor upbringing.

I mean, maybe, JUST MAYBE, if a child grows up in the glare of the media spotlight in a zeleb world which literally judges people on their thigh gap and white teeth, they're going to grow up not entirely at one with their own sense of self? Not a massive leap is it? Not hugely shocking that Miley has gone a bit mental. In a way, it's logical. People have seen everything about her, I mean, what's left? May as well show them all your ass cheeks and gyrate on a stage in front of men and women old enough to be your parents.

And it was interesting to see older women like Rihanna et al shifting uncomfortably in their seats. I mean, they perpetuate this over sexualisation of youngsters with every video they release and every time they step out of the door with their ass hanging out. It's bullshit to say they don't. They are emulated by armies of young girls. And guess what Ri-Ri? This is what happens. This is the outcome.

In a way, it's like Miley is showing us all what our revoltingly looks obsessed, money obsessed, shallow, pointless and vacuous worship of celebrity is doing to people. LOOK AT HER. Every music producer and video producer and person who creates the images of these hugely influential (whether you like it or not) female pop stars did this. They're all responsible. Maybe that's what Miley is saying.

Or maybe Miley feels that without pretty much flashing her foof she has nothing to offer.

Or maybe Miley is just a bit gosh darn thick.

Kind of feel sorry for Gaga though, all that thong action and no one even noticed. I mean, if you've been away for a year or so and are about to make your big comeback and you stick your almost naked ass in front of a camera at a judicious moment I'm guessing you'd want someone to talk about it? Nada. Zip. No one cared. Not even when this happened.

Wonder what next year's VMAs has in store? I'm betting a full scale naked orgy featuring Miley (she doesn't want to now seem like she's no longer relevant you see), Selena Gomez and Rihanna, while occasionally miming to a track in the background to keep up the pretense that any of this is anything to do with music, followed by Lady Gaga debuting her new album while having a full scale pap smear on stage, interspersed with footage of her latest colonic irrigation. Giant screens will show all the detail of her inner bits as well as her outer bits so you don't miss a damn thing.