With such a breath of a harsh rose

This one has been emailing me and emailing me. I never answered. Until he emailed me at a time when I was rather not in the mood for any more illiterate, entitled fuckwits.

And yeah, I was pretty rude and to the point with my response.

Made absolutely no difference though. 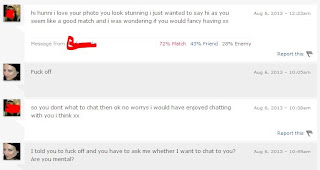 Incredible isn't it? You can say: "fuck off" as your only response, which is very rude in itself. You'd think that the person on the receiving end would either say something about how rude and horrible I am or they would just, er, fuck off. Not this guy though. 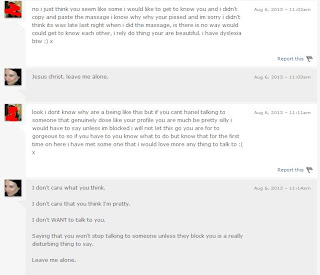 I think he thought me asking him to leave me alone was flirting.

Maybe he has a valid point about me not finding true love because of a rose with harsh breath. Or something like that anyway. The guy is deep. 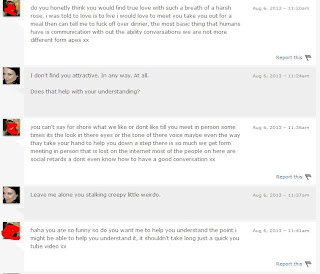 At this point I was not sure I was getting my point across. Although: "Leave me alone you stalking creepy  little weirdo." should be clear enough? 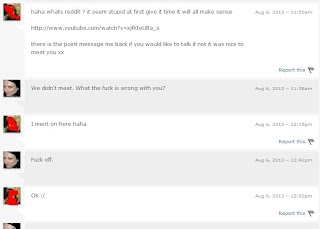 Over the next few days I saw him repeatedly look at my profile. I find this really quite creepy. They know you can see when they do it, so when someone looks and looks and looks, it genuinely starts to feel rather violating. Particularly when you've told them to leave you alone.

I don't like blocking people, because it seems to perpetuate this attitude that these guys can just go at it with any kind of weird messages and as long as they're not blocked, it's ok.

But sometimes you just have to.