Clocking off for OKC September 2013

It's the last day of September and I couldn't let that milestone go by without one more OK Cupid post.

This one is beautiful.

It features a man who says he is 44. I think, judging by his picture, we're looking at more like 64. But you know, whatevs.

And then 24 hours later, he'd obviously gone away to think about his pick up technique. He thought he'd try a different tack. 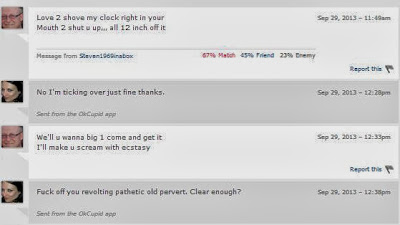 I know. I haven't even scribbled over his face. That's how much I wanted to share him with you.

You can feast upon his face and think about him shoving his clock right in your Mouth.

He has 12 inches off his clock. Amazing. He also didn't appreciate my 'ticking over' joke.

In fact he seemed to like it a bit too much. He appeared to think I was reciprocating.