What is this fuckery? We finally start to get the media interested in another aspect of the parasitic royals what with new sprog and all and then some idiot goes and makes a film about Di herself. Called Diana. Featuring Diana. And Diana's affair with some guy who totally isn't Dodi.

I'd completely forgotten that she had been with other people, mostly because I didn't give a shit at the time. I only remember Dodi's name because it sounds a bit like dodo and his dad was a nutter who put a big golden statue of him in Harrods. Class.

The film stars, quite improbably, Naomi Watts, who can be a truly incredible actress and is possessed of a gamine beauty big nosed Di never managed to attain. Diana was the quintessential sloane ranger and had the whole blue eyeliner and terrible, awful 80s swept hair do down pat. I bet you if she was still alive she'd still be rocking it today. You know like Princess Anne always has the same hair style. And queenie actually. Maybe the royal hairdresser can only do the one.

But she wasn't actually very pretty so it's a bit weird to have someone who is extremely pretty to play her. Watts apparently wears a prosthetic schnozz to di-ify her features. But still. 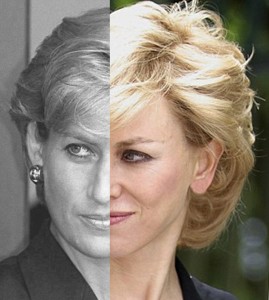 I've now read three previews of this film, from the Guardian (one star), the Times (one star) and, perhaps more surprisingly, even the Daily Heil itself (one star). I only read the Guardian's actual words, and yes of course they're predisposed to dislike a biopic of this nature but I also think that if it was a worthy film they would say so.

It's a big old steaming pile of shite apparently. It sounds like the kind of movie that you find on those made for TV channels. I bloody love those. I actually watched a completely hilarious one about Wills and Kate at university. It was brilliant and actually ended up with them looking into a distant sunset. Oh, and they were American. But you know. Details.

It's about Di and her 'last love'. Who was apparently not Dodi at all. I bet Dodi would be pissed to hear that. It was some surgeon dude. Can't remember his name. Don't care. Directed by the guy who did Downfall ( a really excellent adaptation of the diaries of one of Hitler's young secretaries during the final days of the war), it's a turkey. A big old rotten stinker. An embarrassing smorgasbord of terrible impressions, clunky storyline and dialogue that apparently features Di saying: "I've been a bad bitch." Although, frankly, based on that one sentence alone I'm definitely going to see it. It sounds hilarious.

It also apparently glosses over everything else, like her kids, her relationship with Charles, her mental illness, her skewed perception of reality in favour of a sort of Barbara Cartland-esque love story. It starts with her death and by the end of it, there's a death knell sounding for the career of all involved.

Let the bloody woman die, people. Just let it go. Move on. Shuffle forward. If it wasn't for shite like this everyone would have forgotten her by now, in the same way you always forget dead celebs. What even happened to those millions of books of condolences that people couldn't wait to sign back in 1997? When the nation was convinced it would never forget its princess of hearts.

A few short years later Cheryl Cole took that title according to the media. Brilliant.