The other day I was hanging out with some people and they were talking about how their mum had just bought them clothes.

I vaguely remember the days when I cared about having clothes and mum would buy them for me sometimes. I mean, it was a bloody long time ago. But it did happen. I just can't bring myself to care that much anymore. Which is probably why I go round dressed in the same clothes I wore in the 90s. Literally in some cases.

But then a few days later, after my mum had come to stay and ended up looking after me because, naturally, I was felled with a bout of endometriosis so intense I spent three days weeping. So all in all, not much fun for her really. But she stayed and looked after me cos she's my ma, and she made a crumble and was just ace.

She also hoovered very thoroughly. I've never been able to hoover as thoroughly as my ma. She attacks it with a sort of angry precision. Like the cat hair wouldn't dare stay adhered to the carpet when she's around.

Anyway, that's not the point.

The point is when she left I felt sad. And when I feel sad I like to have a nap. So I went to bed (the one she'd made) and there was a present. All wrapped up. And it was a first edition of an early 20th century political satire based on Alice in Wonderland, called Clara in Blunderland. Kind of like Private Eye style piss take but exquisitely done with the original illustrations from Alice perfectly aped. I'd seen it and coveted it in a book shop earlier in the week. Obviously I then dismissed it because I don't have cash for fripperies.

And there it was. Resplendent on my pillow. 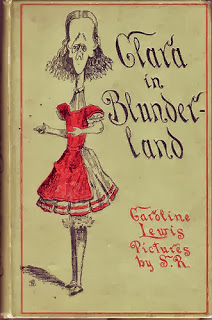 All for me. All from the love of my mother. She's bloody awesome, that woman.