When a man includes a word like chuckles or giggles in a sentence surrounded by asterisks, presumably to show that he is 'saying' it, it makes my skin crawl all the way down my back.

My skin actually feels like it's trying to escape and wriggle away from the whole scenario. A flapping silhouette slithering off me out of sheer cringe.

What prompts this, you may ask? Well, guess what. 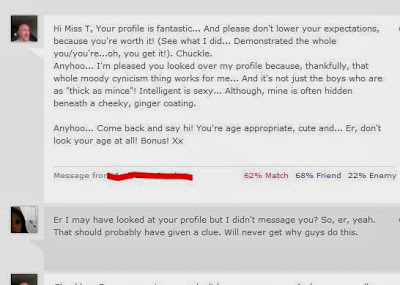 He says 'chuckle'. He says 'anyhoo'. He calls me 'age appropriate' when he is exactly my age. And then, after saying age appropriate he goes on to say how glad he is that I don't look my age. Wat?

He, as you can see, looks at least his age + 20 so it's important that women his age look younger than they are. Obviously.

I had clicked on to his profile, probably by accident, and quickly dismissed him. But he thought that me clicking onto his profile but not messaging was some kind of sign.

Because most women don't leave messages FOR YOU you loathsome dickweed.

And then his fantasy that I am a woman to be put in her place. Marvellous. Fucking marvellous. Winner, right here ladies and gents. 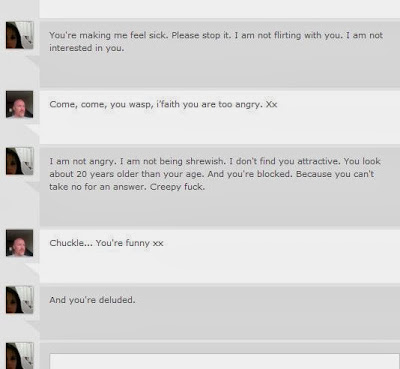 I told him he makes me feel sick. I explicitly state  I am not interested.

And then. I know, he thinks, I'll keep quoting the Taming of the Shrew at her. That'll get her love juices flowing. Women love that shit.

And then I blocked him.

I actually did a small heave.