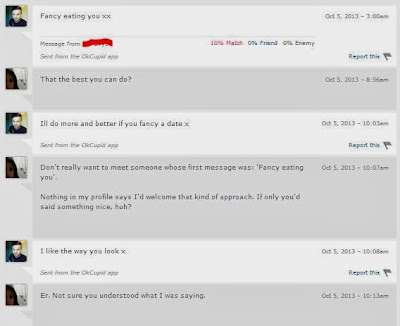 Was he doing some kind of play on 'fancy meeting you'? Or was he diving straight in there? I think it was the latter, given that it was 3am.

I should explain that me going on actual internet dates is finally a thing that is over. Not because I have met someone who I think is wonderful but, rather more prosaically, I had the worst date of my life the other day and I am done. It's just not a thing that I want to experience ever again.

I find the talking before meeting conjures up an entirely false picture of someone and, although that doesn't necessarily mean it won't work in person, it can be rather a shock to the system. A couple of hours of being harangued, told you can't converse properly, that the upward inflection on the end of your sentences is odd and that you're just not how they want you to be can really put you off the whole experience.

But I am loathe to cut off the OKC account, purely because it's so grotesquely entertaining.

This guy, for example.

And then he thought that I meant that although his initial sentence grossed me out, he could just tell me that I look alright and that all would be well. 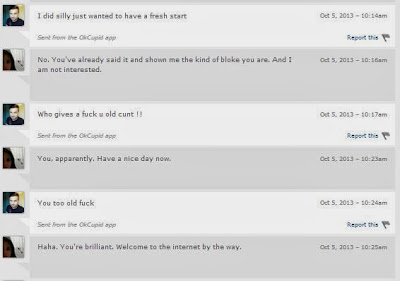 Oh, he just wanted to have a 'fresh start'. I am so silly.

I'm an old cunt and he just doesn't give a fuck, yeah? At ALL. NOT IN THE SLIGHTEST.