It's Hallow e'en. What better night to deal with something that rules my life?

Such are my phobias and neuroses, some days I literally can't cross a road without becoming fractured by panic. A visceral, deep, physical manifestation of fear, which makes my throat close, my gag reflex to trigger and drives me to run. To escape.

Although I was once confined to my house for six entire months because my panic became so prevalent, so all encompassing, so overwhelming that I could not face it any more, I manage much better these days. For the most part. In times of high stress (like much of the first year of being in York) it becomes much worse. But it's always there.

I watched Bedlam this evening, a programme about people who are overwhelmed by their fear in such a way that they live a tortuous, hellish existence. All created by their own mind. It followed James, who looked like he should be singing in some band in Shoreditch but was actually a shell of a man, tortured incessantly by intrusive thoughts and subsequent severe OCD reactions. He'd had to drop out of university and this four month residential therapy stay was a last ditch to conquer his compulsions and regain a life.

It was difficult watching someone so tormented, so aware of his own battle and on such a precipitous knife edge of managing his conditions. Because that's what it's like when you suffer from these kind of mind games with yourself. They are always lurking, always waiting, always on the edge of your peripheral vision so there is no total escape. But you can learn to manage them. And, it seems, James did manage this and, we're told, went back to university 'anxiety free'. I hope he has. I don't think he will have though, it will be there always, I fear.

Von Trier is a man much troubled by fear. He clearly has a good, deep working knowledge of sadness, anxiety, grief and the profound existentialist fear that can haunt a person with clinical depression.

I was blown away by his Melancholia, a film that rendered me incoherent with sobs due to its flawless depiction of breakdown, psychosis and depression. But I had never seen Antichrist. Until tonight.

Fucking hell fire on a stick. It's a good 'un. Thing is about Von Trier, he always manages to make his films so beautiful while brutal, so that I become enmeshed in the character's inner world. As much as one can. It's a film steeped in evil and sadness and it makes you really suspicious of foxes.

A grotesque misogynistic horror according to the Daily Mail on its release in 2009. Just let that sink in a bit. A film that looks at a host of horrific emotions, deals with heaven, hell, creation and death, mental fracture and shares what is clearly a poor view of
psychotherapy, is misogynistic. According to the DAILY MAIL. That bastion of equality and fairness. Fucking dicks.

It's beautifully shot. So beautifully shot that you find yourself watching all this horror and all of the Pain, Grief and Despair while neither sympathising with nor condemning He or She. Are they lost in a nightmare of crippling grief? Or is she plain batshit crazy and he made the biggest mistake ever when he arrogantly thought he could cure her using basic CBT and a spot of hypnosis?

He and She are in Eden, and nature was created by Satan, not God. Or He and She are delusional with grief and living some codependent psychotic break.

It's intense as fuck and, hell, I'm not going to pretend that I get even half of the symbolism. But I do know that I want to watch it again to work it all out. I'll just, you know, look away at those bits. 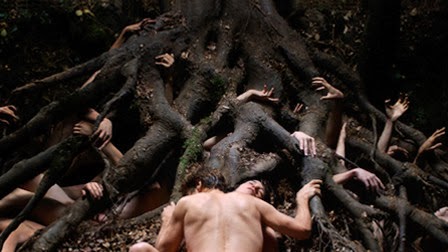