No word of a lie, these two stellar examples of OK Cupiders happened within the hour! It must be something in the air. Perhaps it's some kind of lunchtime treat they allow themselves... "Ah, it's been such a long day at work so far, I'll just have a cup of tea and be revolting on the internet for five minutes."

First up, we have a lovely wee chap whose user name is 'givemebjs'. Come on laydeezzzzz, tell me that doesn't get your knickers all damp.

He asked me if I'd like to rate his cock out of 10. I thought I'd go for a different approach. My reasoning is thus. If you tell them that they are the spawn of satan and right creepy mofos who should go away and have a good, hard think about themselves it seems to turn them on. A vast amount of these kinds of men seem to read that as some kind of flirting.

I'm not sure where they learned about the birds and the bees but something has clearly gone wrong somewhere. So I thought if I respond positively maybe they would disappear in a puff of spunkrags.

By the way, any ladz out there, if you have an answer to my question of "WHY do guys do this?" please do drop me a line and let me know. Can't they just look down? Do they need someone to validate them that they do, indeed, have a penis? What is the endgame here? 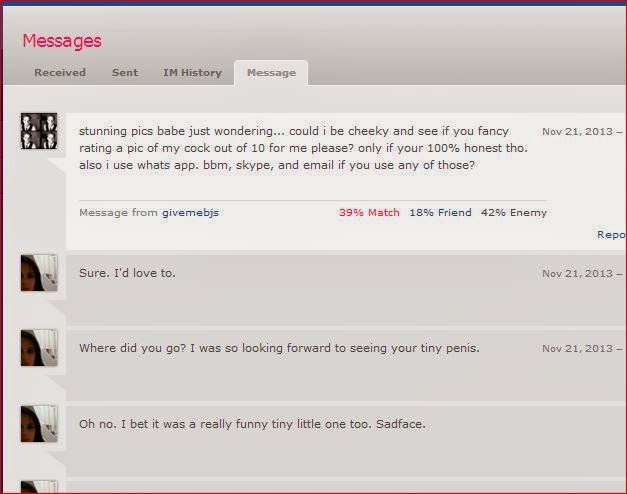 At least that was amusing. If there's one thing I hate it's married men trying to get their leg over with me. I hate it. It makes me want to punch them in their tiny nuts.

So when this guy decided to message me mere minutes after penis guy, I wasn't in the mood. 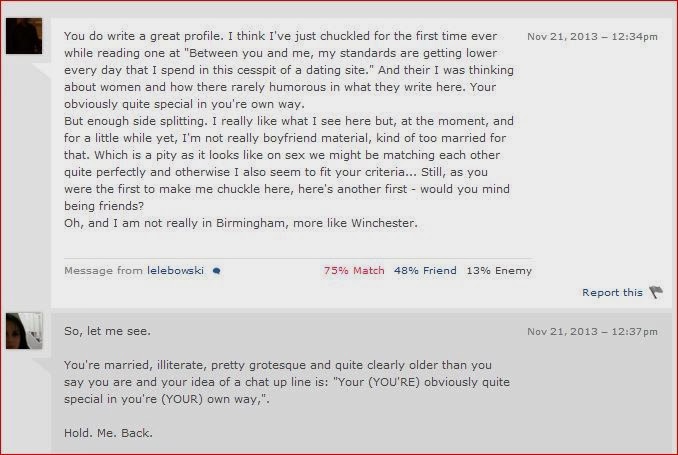 Note how he says: "I really like what I see here [because that's all that's necessary boys, as long as you like what you see then you don't even need to worry about what the other person thinks because, clearly the only thing stopping you is] at the moment, and for a little while yet, I'm not really boyfriend material, kind of too married for that. [kind of too married for that. Only kind of though. Maybe there's a chance for me. Oh, how I long for that moment because] it's a pity as it looks like on sex we might be matching each other quite perfectly and otherwise I also seem to fit your criteria [his thought processes are very pleasing for him aren't they?]."

I was up at 4. I'm tired. I can take some idiot asking if he can get his wang rated out of 10 but I can't take a man being so fucking slimy and pathetic. 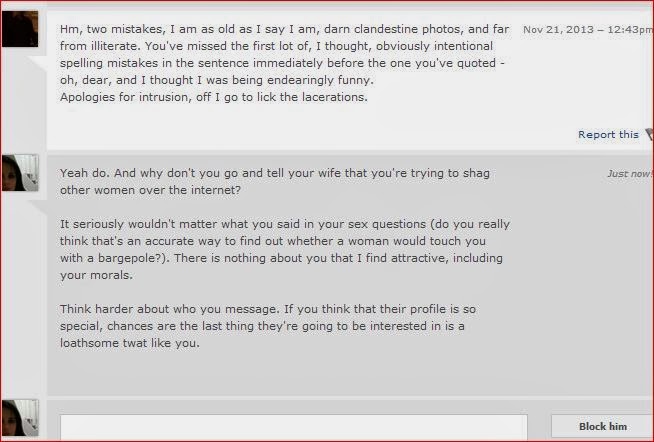 I never did get to rate that dick, just for the record. That loss will haunt me. Perhaps forever.
Posted by thereseraquin at 12:58