I'm licking around the edges of the yoghurt lid of a cold, dark time. I'm dipping a toe in the murky water of chaos, mess and upheaval. I'm venturing into stick, black trauma.

Yep. I've started packing. This may not sound like a big deal but you mustn't underestimate how intrinsically lazy I am and how very much I want to just snap my fingers like a much more dour Mary Poppins and have it all done and dusted.

I don't want to go through my 2,000 books and decide whether I can bring myself to cull any. I don't want to then decide which of my precious paper babies I will be leaving in storage and how many I can get away with taking to the Isle of Wight. I don't want to choose which Jesus pictures come with me and which have to lie face down in the cold, dark storage place. I don't even know where the storage place is. In a couple of weeks, men will arrive and will take my stuff and cast it into some vague abyss somewhere. Presumably it'll be alright, wherever it is.

So this time - the fourth time I've moved in 18 months - I'm being ruthless. I'm casting books out. Ones that I will never read again. Some that I just shouldn't read again.

I decided that old chick lit, old copies of the classics that I have multiple times, random thrillers and all self help could go.

I have only been through about 500 books. And this is probably a third of my self help library. 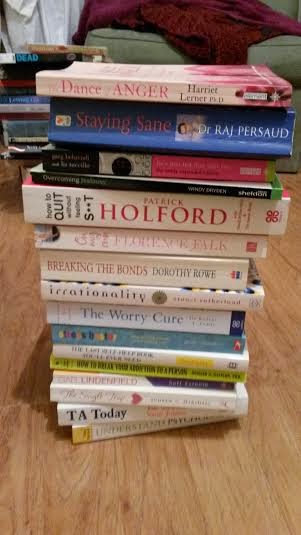 So that's:
I do like self help books. But it's time to let most of these go.