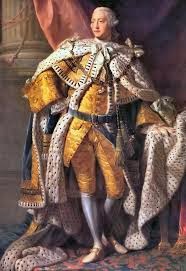 You never know where you are with George III do you? One minute it's all: "Oh yes, it was definitely porphyria, Definitely. No doubt. He introduced it to the Royal Family donchewknow." And we're all watching the Madness of George III and laughing at the Americans for having to have it titled the Madness of King George because otherwise they'd assume it was a sequel.

By the by, that's not actually true is it? I mean that has to be something we made up over here for a laugh. To assume that an entire country is so thick would be rather uncharitable, surely?

And then it's all: "Of course it wasn't porphyria. Who came up with that balderdash? It's clearly a mental health issue. Porphyria. How ridiculous."

Which just about sums up the world of historical research. One person says something was definitely one thing and then another person spends the next decade arguing against it and so it goes on and on. I often wonder how much of a kernel of truth we have about anything these days. Maybe Henry VIII was actually a misunderstood japester who never lopped off his wives' heads. Maybe King John was a sweetheart and we've all got him increasingly wrong. Maybe Hitler... OK. Maybe not. But it is interesting to see how very strongly one theory can preside only to be shattered into a million incredulous pieces by the next dude.

Nigel Hawthorne was well good as one of my favourite Kings. Although I feel like most of my warm feelings towards George III is in sympathy with his obvious mental struggle. But he was also alright as far as these kinds of people went. He was pretty diligent and appeared to do the right thing - such as he could - most of the time. Which makes him about one trillion times better than some others I could mention.

My point is though that it's the anniversary of his death. He died in 1820. I like to remember people as people, not just as names and in my head George III was a bit of a sweet old man who was ill. Imagine suffering from mental illness then? I suspect I'd have been chucked into some horrible workhouse or nuthouse and left to turn myself into Bertha Mason. Being treated badly while in the throes of mental illness could easily push most people over the edge.

It's a fine line for all of us between 'normality' and, erm, an altered perception. That's what I'll call it. Because that's what mental illness is. It's a different way of computing the things around us, a different response to the world and its perceived dangers. It's in all of us. Waiting.

It's also important to remember that George had hugely long bouts of sanity during his lifetime and, although he sadly ended his life shambling around and talking to trees and the like, he was a normal guy. With what they now think was severe manic depression. Or Bipolar Disorder.

Porphyria was the thing though, man. That was a definite. It was all very very clear. He had purple wee and that sealed the deal. We've witnessed a historical 'truth' heartily debunked by the majority, leaving a rather vague posthumous diagnosis of Bipolar Disorder. If it was today he'd have been shipped off to the same health farm that Catherine Zeta Jones ends up in every now and again, he'd have been stabilised with drugs and he wouldn't have had to die such an ignoble and unfair death.

Imagine being back then when no one could help you and no one would listen and no one could give you any kind of idea what the hell was going on. It must have been terrifying and one could argue that his descent into total madness was a blessing - as long as it was a sort of soft cloudy madness and not a terrified-trapped-in-his-own-head-madness.

Mind you, he probably got better treatment then than those with his illness do now on the NHS. I tried to get on a waiting list to see a shrink in York. They told me it would be at least 12 months to get ON the list and then another 'up to 12 months' to see anyone.

So maybe we're not much better off than poor old George III after all.