Oh God why have you forsaken us? For surely, should you exist, you would not allow such an abomination to exist.

I am, of course, talking about I, Frankenstein. Which I went to see today. It only cost £3.50 and, frankly, I feel ripped off.

Viewers who begin this film with any kind of religious fervour will have well and truly have lost it once they've sat through this dire mess of a mixed up morality tale.

Mary Shelley's touching, thoughtful, troubling story of man messing around with God's creation and its tragic consequences is dispensed with in the first five minutes of this feast of excretion. Aaron Eckhart's ridiculous, booming voiceover immediately paints The Monster as a dull voiced pre pubescent who thinks his dad is a giant dick, ratherr than a soulless, lonely creature trapped in tormented agony. Within ten minutes we've seen the last of Frankenstein himself and are fully into the thick of The Monster's story. And man, is he a whiner.

Obviously, Frankenstein's Monster has to be played by a big dude with a hulking presence and preferably tree trunk thighs. And here is where Eckhart excels. Lovely, strong thighs. Particularly when he's running heroically. Which he does a lot. He has a face, however, like a ham. There is none of the pathos you'd expect from the make up department when it comes to a face that's meant to be a composite of many other dead dudes. Instead they just stick some of those crappy rubber Halloween scars on Eckhart's actual face.

Talking of ham, by the way, that pretty much describes his acting style. I can't remember what he was like in anything else. But by golly, he's terrible as Frankenstein's Monster. Or, Adam, as he is subtly named by the Queen of the Gargoyles.

Who, I hear you say? That's right, the Queen of the Gargoyles. It goes something like this.  when Satan was expelled from heaven, he took with him demons, which now take human form. Naturally. The angels came down to protect mankind and are disguised as gargoyles. Obviously. There's a queen, whose name I can't remember and a Demon Prince.

The Demon Prince is played by Bill Nighy. Yep, that Bill Nighy. The one who old ladies think is so lovely and wasn't he good in that Richard Curtis film? No, he was shit. And he's shit in this. His plastic surgery is scarier than his demon make up though, so there's that.

They're all after the Book, which is Frankenstein's detailed notes on how exactly he created his Monster. Apparently in the 200 years since he was made, they haven't been able to replicate it. Yeah, riiiiiiiiiiiiiight.

So they all fight a lot. A lot lot. And run around. And then there's this master plan for Demon dude to reanimated thousands of human corpses with the souls of demons. Or some shit. I dunno. I was bored shitless by then.

There's a love interest. She's blonde and beautiful because why fucking change that up Hollywood film makers? She only falls in love with him when she sees his incredible torso though. He has a six pack to die for. And 12 men did die for it apparently. I'm no expert on reanimating corpses, I know, but I'm pretty sure that using bits of a dozen deaders would not result in the torso I saw in that film. I mean look at it. 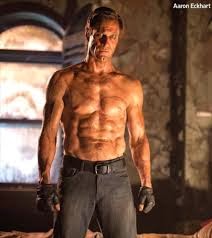 And that is literally the only reason to see the film at all, so I've just saved you two hours of your life. You're welcome.

It is, of course, based on a graphic novel. So the bastardisation of Shelley's creation isn't solely down to the film makers I suppose. But the screen writer needs putting down and perhaps reanimating with the soul of someone who can write a sentence that doesn't make your bum cheeks clench.

And then it ended.

That bit was brilliant.