I Wuda split u anyway xx


So, after a brief hiatus where I was exploring other options, I'm back on internet dating. It's a laugh isn't it? I mean, it's something to do.

As I'm skinter than a skint thing, there's no way I'm paying for any of the posh sites, obviously. Guardian Soulmates? Knob off you lefties. Eharmony.com? After seeing your adverts every five seconds I'd rather die single than end up with someone like that.

So, good old OK Cupid it is. As the more interested (all three of you) may recall, I was banned from OKC due to rejecting some old perve in a way he didn't like. So I had to make a new profile. How tedious. But I did. And then I thought, why not add in Plenty of Fish to the mix?

Last time I looked at this site, it was the vilest of cess pits. Where those too chavvy to use OKC went to die. They have actually cleaned up their act a bit now, and you can basically select to not be contacted by anyone who's just trying to bang anything with a pulse. In theory, like.

So I've been on it for about four days and have received hundreds of messages. I say this not to be a dick and boast, because there ain't nothing flattering about 99.9% of them, but to illustrate that when you dip your lady toe into the mire of online dating, you're instantly circled by piranhas with penii.

There have been many, many messages that have gone straight into the bin. A couple of gross ones. Notably from someone who called himself HarryDom. Shudder. Oh, and one, interestingly from a very young Mel Gibson.

I also get the same guys messaging me over and over and over. One guy sent eight messages in the space of two minutes the other day. So now I try to stop this by replying after the second one. Thusly. Note this is from 'NiceWelshman'. His profile went on at length about how he's a really nice guy, into personal development, meditation and spiritual growth. YEH RITE 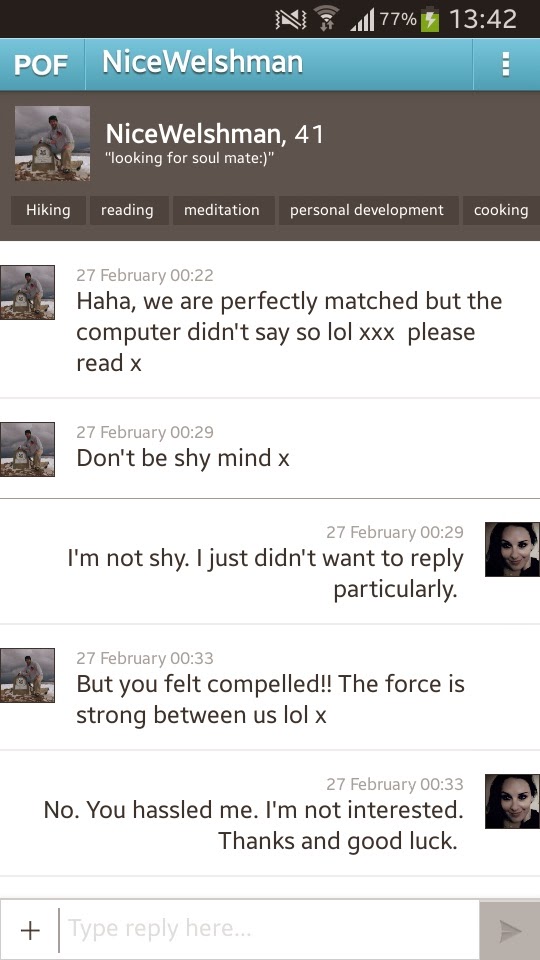 That must be the end of it. What with him being such a nice guy.

What he says here is "Such a shame coz I love yr croocked nose." just in case you couldn't read it due to my very special screen shotting technique. 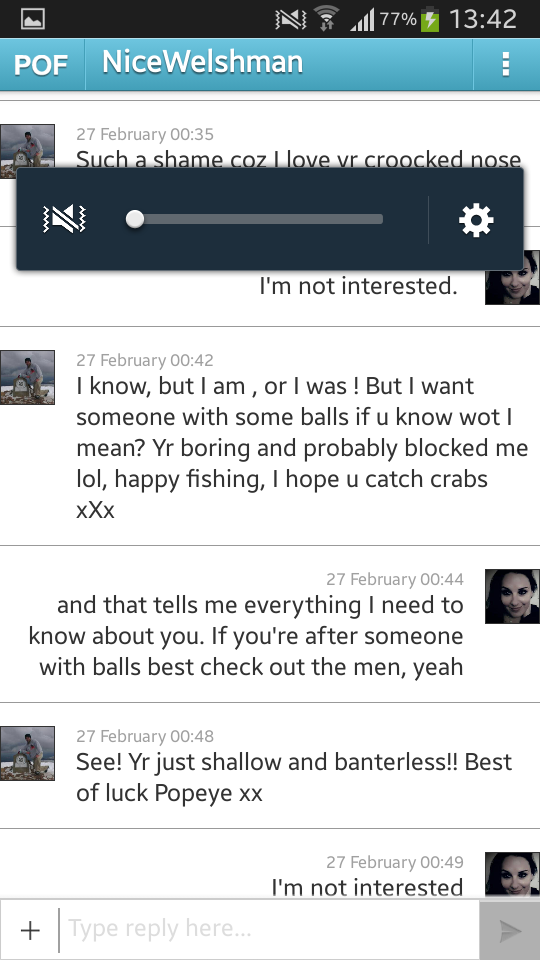 Popeye? What's that about? And yes, there it is. I'm 'banterless'. Could there be any more damning insult from lad culture? Imagine being told one is without banter. It hurts I can tell you.

Anyway. As I said to him 'I'm not interested' 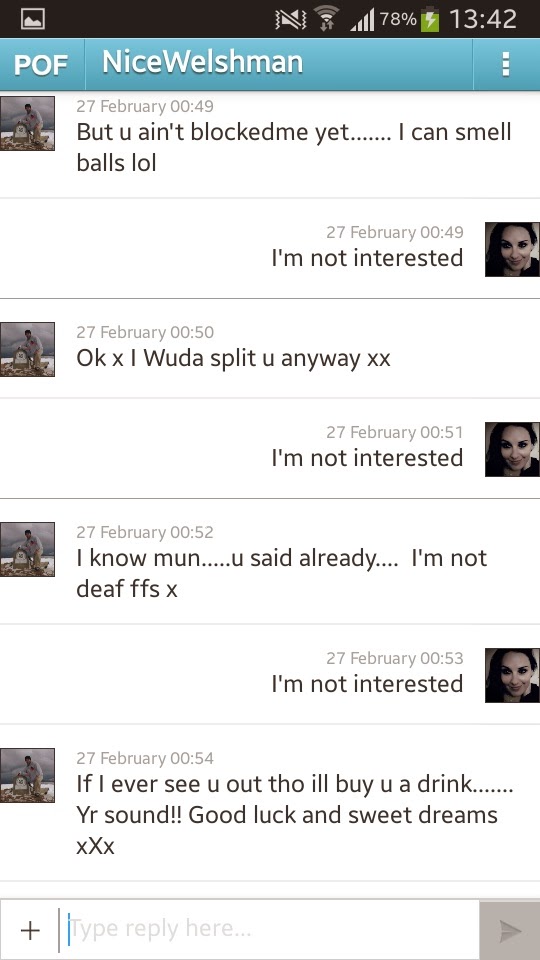 After all that, and repeated 'I'm not interested's, he says I'm sound. What in fuck is wrong with these men?Was that flirty banter from someone with an IQ less than 50? Is that what it sounds like? Does he think: "I'm not interested" means that I am interested but just playing super hard to get? 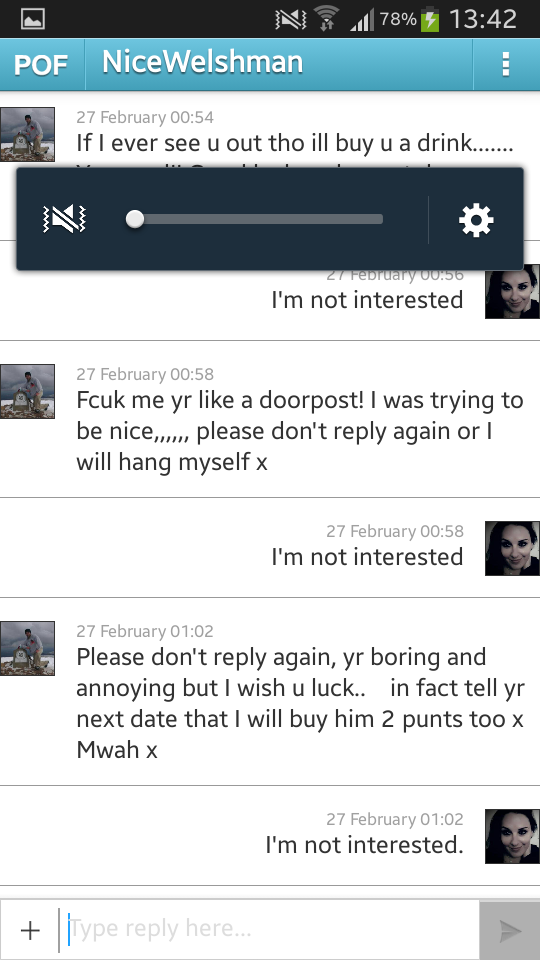 And then, this morning. 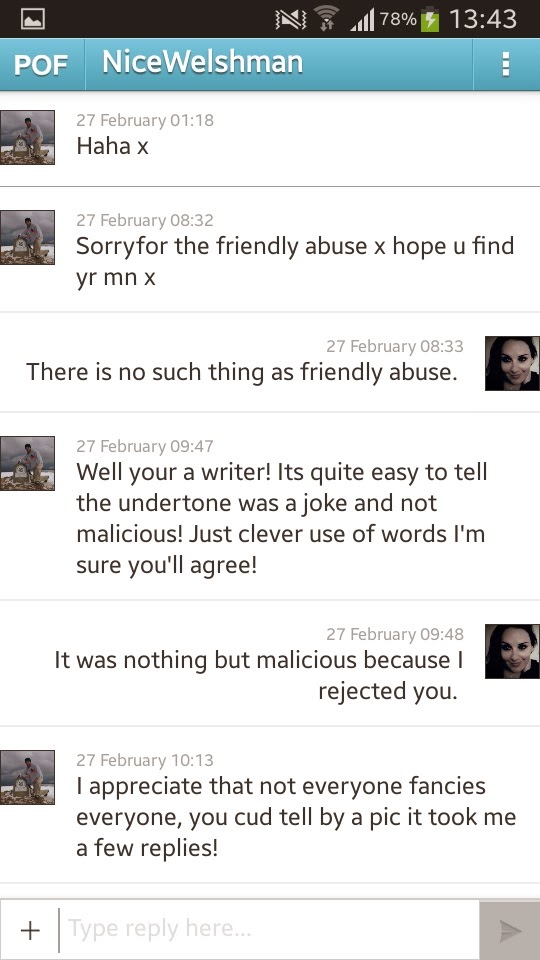 It was 'friendly abuse'. An oxymoron from an actual moron. It's so good to be back.
Posted by thereseraquin at 15:23