I've went for an early morning swim today. So early, in fact, that the pool wasn't even open.

While this would have left me gnashing my teeth and spitting with pointless fury had I been anywhere else, as it was I strolled on for five minutes to the beach. It's one of my favourite beaches because it's still pretty wild and, as it's rocky it doesn't have that sterile homogenised feel of the beaches that are crammed with people during the summer. It overlooks the Solent and you can see the forts rising from the sea like monolithic creatures.

It is also pretty sheltered so I was able to sit on a rock, hidden from view and hidden from the howling gales. The tide was out and it was generally fearsome rather than terrifying. A few times recently I've been to the beach and been completely awed by the power of the waves. They have been smashing into the sea walls all around this tiny island for the past six weeks, relentless and pounding.

And it's starting to show. It's like living at the start of a dodgy disaster movie. Maybe that one with John Cusack. We're fully into the weird weather conditions which, as we all know, is stage one of the climate change disaster movie. While America freezes in the grip of terrifying ice storms, the UK is drowning. And it's just as they said 20 years ago. The weather is getting warmer and wetter. The South West and the South are drowning.

I've been coming to the Isle of Wight since 1980 and I have never actually seen bits of road disappear before. Now, every day, you can see where the sea has swept in and taken the land back. The coastline is always changing, of course it is, but you can't normally see it happen day by day, hour by hour.

Today I saw that someone's ornate garden and concrete balustrade has just disappeared overnight. It's part of a Victorian house right next to the yacht club in Seaview. A yacht club that's looking less and less likely to stay in one piece. These are buildings and houses and parts of land that have survived over 100 years and they're just gone.

At St Helen's there is a ruined church. It apparently slipped into the sea in the 18th century, apart from one corner that has been painted white and is now used as a landmark for ships. But all around it the road is collapsing.

This tower has been standing since the 13th century and is all that remains of the old church. The sea reclaimed part of it in the 16th century and eventually it was allowed to decline and wash into the sea. Rumours abound as to why this was allowed to happen and, as they revolve around devil worshipping priests, I bloody love it. But soon enough it will be gone, as will the surrounding countryside, the old golf course and the beautiful wild coastline. 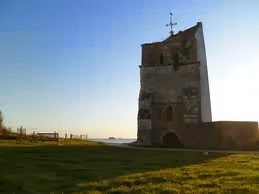 We're watching the coastline change around us every day. Roads are developing huge cracks through them. It's not as dramatic as the movies but it's a bit scary. The climate is systematically claiming this island back. And it's a weird thing to witness.

In twenty years time will our children wonder what the fuck our generation was DOING? We're too slow to change, too slow to believe it's actually happening and I think we're starting to reap it. I do, however, watch a lot of apocalyptic films and read a lot of dystopian novels, so it could be that I'm being over dramatic and this is just a randomly bad winter.

I mean, hopefully, if we're lucky and continue to use resources as if they are never ending, and just sit here and ride this out, then we'll all shuffle off this mortal coil before the real bad effects take place. I suspect the human race will adapt. We'll probably grow gills like Costner in Waterworld.

I quite fancy that actually.