They say it takes six months...

... for a rescue dog to relax enough to show its full personality. I think it's safe to say that Sushi has now fully reached the stage of comfort and relaxation where she is oh so happy to just lay back and be herself.

Stage 1 was getting her from Romania to here. Stage 2 was falling in love with each other (took approx 24 hours), Stage 3 was letting her know that she is safe for the rest of her days and now we're on to Stage 4. Seven months in and Stage 4 appears to be me running around after her like she's some kind of princess among pooches. Some queen among canines. The most speshul doggie that ever did live.

Recently I've been concerned because she's been stopping a lot on our walks. She used to walk quite happily for around two miles before needing a rest and yet, suddenly, here she is, stopping every few yards. It happened again today. We were going down her favourite bridle path and she just kept stopping. She is then impossible to move. And I mean impossible. She wedges her furry bottom down and will. not. move. So, I either pick her up or I get stared at for dragging a clearly three legged dog across the ground by her lead.

It's happened so often that I was just resigning myself to calling the vet and seeing what's wrong when I had an epiphany. What if, I thought, what if she just doesn't want to walk this way? So I let her lead and she was off like a rocket. This poor pathetic little goggie who couldn't even move even a single step two seconds before was now dragging me up a hill, ears flapping, tail wagging. I had been hoodwinked. Hoodwinked good and proper.

Turns out she wanted to walk further and a different way and it also turns out, if she doesn't get her own way, she screams and screams until she is sick. Or at least the dog version. Which is to pretend that her leg hurts and sit down. Her furry arse seems to turn to lead so that nothing will move her. It's like she's commanding the laws of physics. She only weight 7.5 kg for Christ's sake. And if I pull at her lead she falls over onto her face, JUST at the moment someone walks past and then they clearly think I'm the cruellest, evillest dog mother in the universe. I swear she laughs afterwards.

So she drags me around a two and a half mile loop while not even breaking a doggie sweat. The only time we paused was when she suddenly stopped and hunted out a pork pie. A fucking PORK PIE under a hedge. How? Where? Who is just leaving pork pies under hedges? And how does she always find them? When I'd wrestled that out of her vice like grip (she managed to swallow at least a quarter of it, so that's going to be fun tomorrow) we got home. I then fed her, stroked her ears, booked her in for a haircut and stroked her until she fell asleep on her double pillow/bed combo arrangement.

I really need to get her to doggie classes. That's going to be Stage 5. Before I end up surrendering my bed, food and shirt off my back. (I totally would).

I did try and talk to her about it. She didn't seem bothered to be honest: 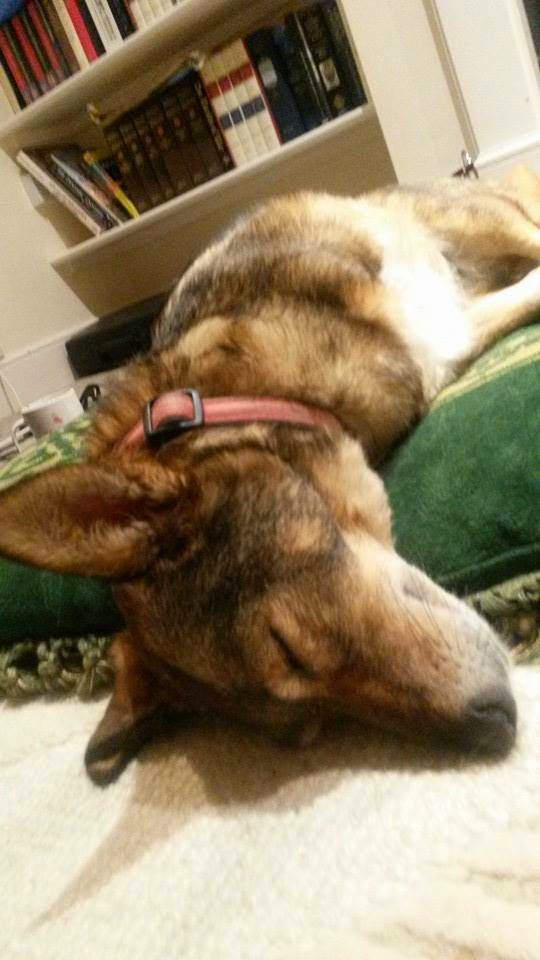