No, wait, coffee cures cancer. It's chocolate that gives you cancer. And air. And water. Don't take those vitamins. No, DO take those vitamins. We're all familiar with the Daily Heil style of scientific reportage aren't we? We all know that there is no truth in their horrible clickbait articles about the 'dangers' of the every day. We've come to expect it. It's a national joke. Right?

So when did The Grauniad start joining in? If you're on Facebook or spend any kind of time lolling about on social media, and, let's face it, if you're reading anything I'm writing, then you definitely are. If you have any kind of office job then, obviously, you'll be spending at least 80% of your time on Facebook. I mean, what's the alternative? Actually trying to give a shit? Don't be silly.

If you are a follower of The Guardian on Facebook, Twitter or whatever the kids are using these days, you'll most likely have noticed that they have fully embraced the prevailing lore of media. The new media. The social media. That is, any kind of impartial, skilled writing goes straight down the swanny in favour of a headline that will get everyone all riled and emotional.

Naturally, 90% of The Guardian's headlines are something to do with feminism - not real feminsim, the neu feminist shit that just twists all messages and dilutes anything of any import, you know the kind. Usually in list form with women holding up placards about something or other. Tedious it is, and I absolutely consider myself a feminist, in that I would really like it if things could be equal, yeah?

Considered, reasoned, impartial debate has gone and in have come headlines like this. This isn't part of the 90% of their headlines that incite gender war, purely to get everyone to fight with each other in the comments. This is part of the 10% of headlines that completely bastardise research/comments by 'scientific experts' to impart a 'warning' that is 99% bullshit. See how I use lots of stats? They're about as accurate as this kind of shit: 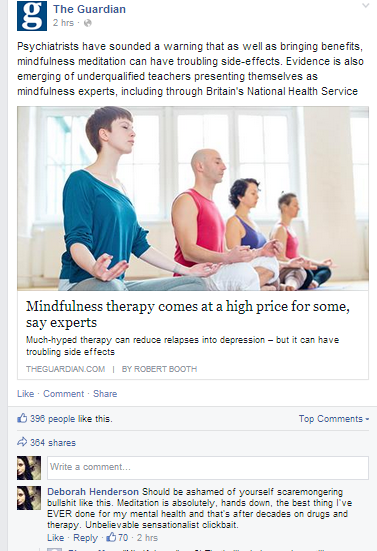 And I fell for it. I started arguing in the comments. Hang my middle class head in shame. People obviously started getting racist, offensive, abusive and willfully missing my point. But this pissed me right off. RIGHT off.

I'm a passionate and dedicated advocate of mindful meditation for mental health issues. It has helped me more than anything else - and we're talking about literally decades worth of pills and therapists. It's the single best thing we can all do for our own mental health - and that includes people who don't suffer from depression and anxiety.

The debate about mental health was briefly opened up online due to Robin Williams' tragic decision that he couldn't take it anymore. My issue with articles like this is that it's sensationalising the miniscule amount of people who might not benefit from meditation. On reading the article it turns out that A Psychiatrist was talking about people who are severely mentally ill. People who are so ill that breathing in and out without proper medical care is dodgy. And I don't deny that they exist and that no, mindfulness meditation probably isn't what's best for them. BUT for MOST people who are reading the fucking Guardian, mindful meditation is a solid gold positive.

And it upsets me that a media outlet like The Guardian is taking the time to publish sensationalist crap about something that is within everyone's grasp. We can't all afford private healthcare, we don't all want anti depressants, we don't want to join endless waiting lists for psychiatric care.

I wish I'd started meditating years ago, who knows how much I would have been able to help myself by now?