Can meltdowns ever be good?

Every now and again - and, crucially, not always linked to the time of the moon goddess and her spiffing visits - I have a right proper alarming meltdown.

It's a cyclical thing, so maybe it is linked in some way but I don't know, I'm not a doctor. And it doesn't really matter anyway. The whys are sometimes irrelevant, I am slowly learning this lesson. Only taken me 38 years to work out that sometimes, compulsively over-analysing shit is actually pointless, boring, counter productive and a waste of one's precious time.

Last night was such a time. Apropos of nothing in particular, other than the usual crushing anxiety of being alive, I lost the plot a little. Had a howl of existential angst. Basically cried a lot and became incoherent when attempting to explain myself to my cat.

Becoming suddenly entirely overwhelmed by anxiety is terrifying. And even though it's approximately the five millionth time it's happened in my life, it's always wonderfully fresh and new. That terror, dread, staring into the void blackness with the certainty that there's no way out, no one is coming to help and no one can hear you scream.

It's a terribly first world problem, I suspect. As people tediously say on social media, what about the starving people, what about the wars, what about people who are worse off than you? Thing is, you see, thinking about people who are worse off than me doesn't actually help. It doesn't make me think: "I'm alright because I'm not dying right this second or my child hasn't had its limbs blown off or I haven't been shot by a nutter gunman so I'm alright Jack.". It doesn't work that way. All that does is push me further into the rabbit hole of despair because there is so much pain in this world, so much fear, so much horror.

When you look around and you see the people suffering so much, just in your immediate vicinity, and you realise how helpless you are to actually change anything and then that runs into a spiral of crushing despair at the futility of existence and what's the fucking point anyway? Well, that doesn't really do much to lift one out of the pit. Add on the guilt of the 'self indulgence' of becoming this anxious wreck and well, the simplicity of that thought just didn't really work now, did it.

My head starts to resemble some kind of hideous depiction of hell - screaming souls and pain and horror everywhere. Think  Goya. Think Munch. Think Bacon. This is the inside of my head. Perhaps without the papal overtones: 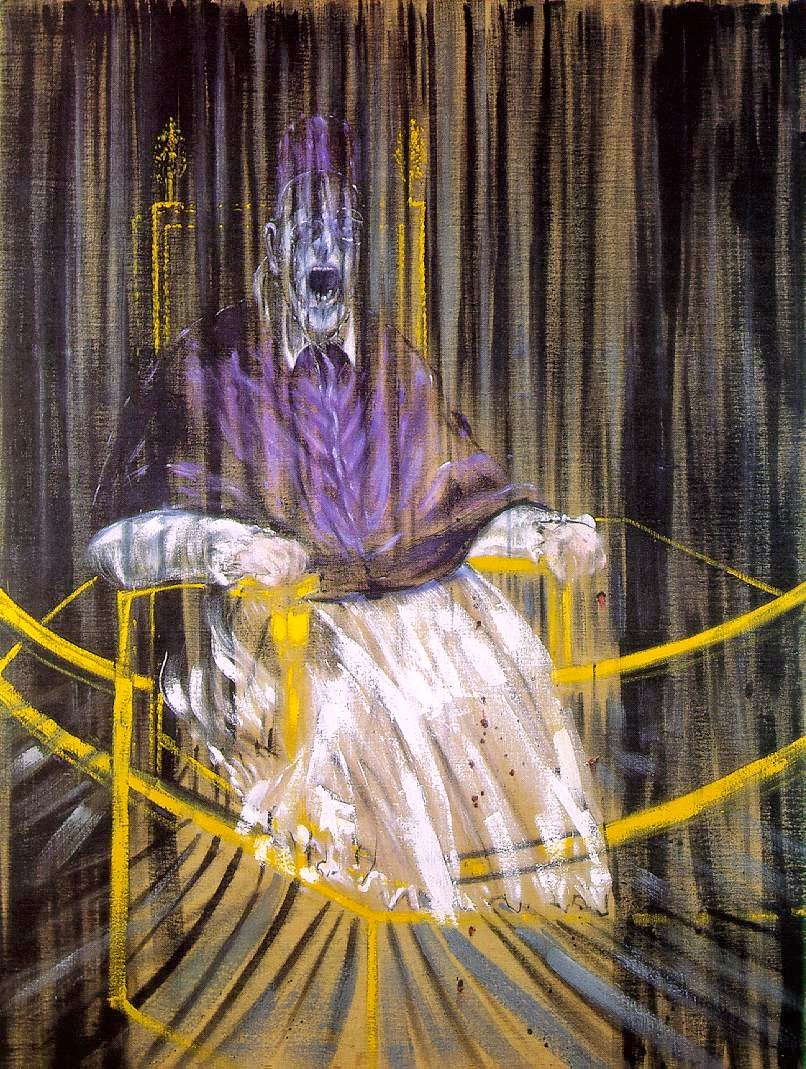 All of this was just while sitting in front of Children in Need's Great British Sewing Bee, by the way. I wasn't in any kind of danger. At that moment no one was needing anything from me. No one was hassling me. No one was hurting me. Also I wasn't supping the liquid morphine I like to have as an aperitif. Stone cold sober panic flip out.

Nothing is working. All my plans are pointless. Everything I'm trying to achieve is useless. There's no good, no hope, no joy in this world. There's nothing. Just nothing. We're all just rattling around, using up our allocated number of breaths, filling our lives with drivel so we have something to do between the cradle and the grave. I'm 38. I'm alone. I'm possessionless. I'm somehow no more advanced than I was when I was 16. I'm screaming into a void.

And then. And this is something that happens every time. I feel calmer. I feel purged. A plan starts to form. I realise why I'm doing what I'm doing. I look at where I am and I think, hang on a goshdarn minute, maybe this is where I'm supposed to be. Maybe this is OK. I'm alive. I'm healthy (physically, ish, obviously not mentally). I have a few people who care about me. I have creative outlets that I can indulge. Things are just not that bad, guy. Lighten the fuck up, man. Breathe.

Open your eyes. Look around. And the fog starts to clear and the black starts to recede and I feel, well, OK again. Like some black sticky goo has been cleaned out of my brain.

And I've done no damage, I hope. My cat is used to it. I think he just tunes it out by now.

Being a human being is very very weird.