She has a face like a melted wellie and a wig like Barbie's cast offs all smushed up into a lump that sits atop her orange head. Like Goldie Hawn having gone through a blender. Like Miss Piggy's future nightmares. Like Zelda from Terrahawks on a good day. Look: 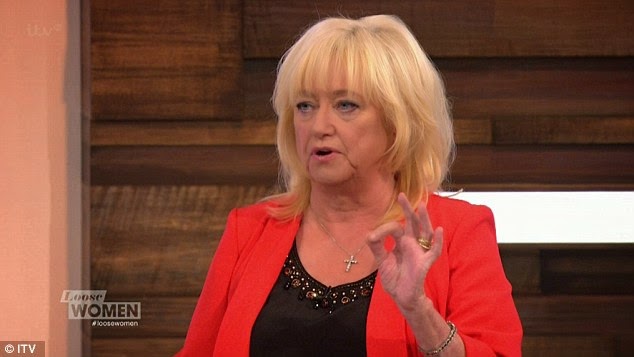 She has been on telly forever and ever. I used to skive school when I was about 10 and there she was. On the telly with that wet tit she has for a husband. The one who was caught nicking loads of champagne from Asda once. I think they should have just let him take it, he obviously needs to be roaring pissed to put up with the crazy he married.

She's always got the shakes. You know the kind of shakes that could denote some kind of illness a la the lovely and fragrant Michael J Fox, but as they've been going on at the same level since about 1902, it seems they're most likely the DTs.

The DTs, for the unitiated, are the delirium tremens. They mean she is a piss 'ead. A 'functioning' alcoholic. If functioning is an adequate adjective to describe the meandering nonsense that passes for 'presenting' when she is in front of our screens. Whenever I saw that programme that she was on with that man she just sort of gabbled out the autocue and looked like she was going to cry.

For decades, nay centuries, Judy and Rich were the King and Queen of Daytime TV. An accolade with as much glory as that Arse of the Year award that old soap stars always win. Rear of the Year is it? People like Kerry Katona win it. I think they must have a very very loose idea of what constitutes a great arse. Katona is not a looker, let's face it. Last time she scrubbed up well was approximately 27 years ago and approximately 32 kids ago.

But then they disappeared. Judy and Rich I mean. Who knows where they went? Down the Spar to get lots of cider I think. Briefly I recall their daughter becoming 'famous' in manner of that kid what came from George Best's loins. Ahhh, whats his name? The one with no hair but was considered studly around about the time the tabloids were telling us Jodie Marsh was fit. You know. Callum! That's it, Callum Best.

Their daughter may have been on Strictly, I think. Something like that. Maybe Celebrity Shag Island. Or the jungle one maybe.

Anyway, the reason for my reminiscing over Judy of the horrendous jackets and the facially challenged wrinkles, is that she is back on 'our' screens in Loose Women. Now, I watch a lot of shit, I'm the first to admit. I watch Australian Masterchef. AUSTRALIAN. It's terrible. But even I have never watched an episode of Loose Women.

And this episode wouldn't have come to my attention had Judy not done a boo boo. A wrong 'un. She did an error. She was talking about a footballer called Ched Evans. Ched. Ched Evans. CHED. Ched raped a 19 year old woman two years ago. He was in Rhyl at the time. He was tried, convicted and jailed for five years. As is our country's wont, he isn't serving the five years (that would be madness, a rapist serving proper time? Get out of here), he's actually being released imminently.

This kicked off a discussion. Judy reckons it's totes cool that he's being let out and that he should get his job back because the rape that he did "wasn't violent" and the woman who was raped had had "far too much to drink". I think I know someone else who has had "far too much to drink" eh Judes? But pissed up were we before you went on? Bit nervous? Bit o' Dutch courage needed?

Because unless you were pissed when you said that then you are outright facking mental love.

I wonder how Judy would feel had it been her Chloe who had been pissed up in a hotel and was 'non violently raped' by someone. I wonder if she'd be feeling quite so benevolent then?

It's difficult for women to find the courage to come forward when they're raped. It's a weird culture out there. With so much bizarro pseudo feminist rantings out there that, in my opinion, do nothing but set 'the cause' back, along with the misogyny, fear mongering and culture of online bullying bullshit, it's amazing that this 19 year old took him to court. That he was tried and convicted should be enough for those of us who didn't have access to all the details of the rape (sorry, Judy, the bit where he non violently stuck it in her by accident), and now even after all of that here's people just saying that it wasn't really that bad in the first place. I wonder if Judy would like the victim to apologise to Ched for making a fuss in the first place. I mean, it wasn't even a violent rape and the victim was pissed. Probably wearing a short skirt and all. I mean, come on. That's barely rape. Right Judy?

So yeah. Judy Finnigan, how's about laying down those bottles o' booze eh? See what the world is like when you're not completely raddled, it's affecting your judgement. Lunatic.