So much is going on at the moment. And most of it is bad. Everywhere I look there are friends in pain, people suffering, animals missing, murderers getting away with it, people dying... and I can't seem to make a dent in helping anyone with anything at all.

A small glance at the news today has reminded me of the futility of hoping for any kind of actual justice - I have the angriest, rantiest fire in my belly about Pistorious and the laughable sentence he has been handed. But I see no point in writing it. I can't change anything. It's futile rage. And it's going round and round and round in my head.

Instead, I'm going to dive into denial of all actual emotions and important stuff and talk about Renee Zellweger's face.

A passing glance at this picture and I would have thought that it was perhaps Kim Basinger on a good day (also a victim of bizarre face shifting).

But it's Renee Zellwegger, man. She of the pout and squinty eyes. She of the blond-y American-y skinny look that has worked for her so far.

I've never been a particular fan of the lady. She was a dreadful - and I mean dreadful - Bridget Jones. There was a time in the mid 90s, you see, where Bridget Jones was funny and fresh and new. And it could have been a good film. But it wasn't, in the end.

I'm not sure I can remember her in anything else. I mean, I know I've seen her in stuff. Ooh! Empire Records! She was good in that. But she has a simpering kind of beauty that I couldn't really get into. Not that she's there to be beautiful, of course, she is entitled to look how she wishes without needing to please randoms like me.

But I wouldn't half like to find out what's going on in her noggin. What made her purposefully turn herself from this: 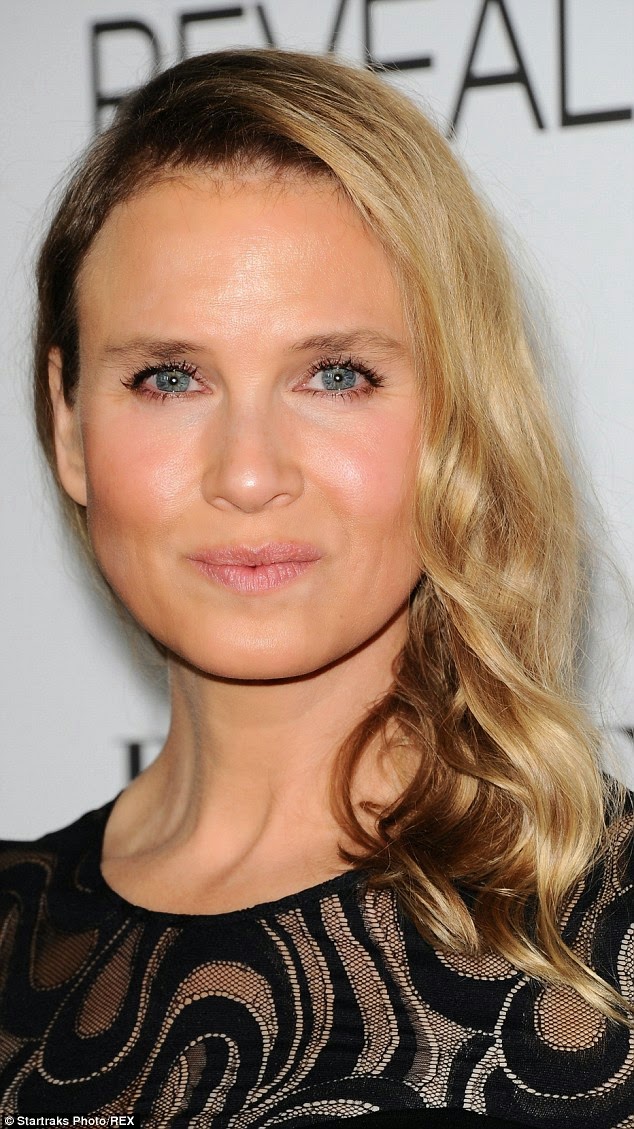 OK, OK, you might think it's not fair to compare a picture from the late 90s and now, obviously a lot of time has passed. But this isn't actually about ageing or saying she looks shit older. It's nothing to do with that at all.

Here she was just last year:

Suspiciously shiny faced she may be. Chicken armed she may be. Sinewy she may be, but she is also recognisably her. Her face is most definitely Renee Zellweger shaped.

Not any more it ain't.

She's 45 years old. But somehow now looks like a 90 year old wearing her own death mask. She's literally changed her face shape. Pumping loads of chemicals into her forehead and lifting her eyes up has given her a bizarre doll like stare and a really odd hairline that looks so freaking unnatural it disturbs me.

Is it a kind of sickness? Do women who do this hate themselves so much that the only way they can face the fact that they aren't 20 is to mutilate themselves? What does she think when she looks in the mirror? Is it a good outcome for her, I wonder? She looks happy enough. I think that's a smile. It's possible she's had her face shaped into a rictus grin though, lest anyone ever see her looking anything other than blankly happy.

Maybe she likes it, and as I say, I ain't no Daily Mail. Everyone, man, women and child have the right and my best wishes to look however they wish. Wear whatever they want. I don't give a shit. It's not about her face anyway. It's not that I think her new face is horrible. It's not. It's just completely fricking different. And there's something profoundly depressing about hating your own face that much.

Perhaps it's addictive. Perhaps when you've had one little bit of botox you're hooked immediately. Maybe it's not botox. Maybe it's heroin.

And yes, this was completely puerile and pointless wasn't it? You're welcome.
Posted by thereseraquin at 20:07