It's time I faced up to it

My name is Deborah and I am a goth.

I've tried not to be. I've tried wearing colours other than black. I've even tried lightening my hair. But I just am. I like it. I've always liked it. I like black and skulls and goth music and pompous pop stars and lyrics about suicide and kohl and dry ice.

For a while in my 20s it was as if it had never happened. The crimping. The cheap black hair dye. The Sisters of Mercy love ins. But now, as I grow ever older, I love it just as much.

I like black and lace and Victoriana and mourning culture and bats and dramatic classical music and leather and spiders and dingy clubs that play Sisters and long skirts and kohl and being pale and having long black hair.

I watched Goth at the BBC last night.

Siouxise was first. Can't help it. Want to look like her. Just do. Always have, always will. I still do my make up the same way and if I can ever get thin enough I'm definitely going to wear more leather. Spellbound it was. Loved it.

Bizarro inclusions aside (Depeche Mode, really? Strawberry Switchblade, REALLY?), I did chuckle at Fields of the Nephilim. Could never take them in any way seriously back in the day anyway and my lord, it hasn't aged well. Moonchild this, Carl. You big bellend.

And then Wayne came on. I did used to love The Mission, but again can't honestly say I like them now. Tower of Strength was just so... bombastic. Overblown. A bit, well, a lot, cringey. Also how did I ever find him attractive? What exactly was wrong with my eyes in the early to mid 90s? Affected and bombastic. And what was he doing to his hair? And why the crouching? And just why?

But then Sisters came on. And all was well. Lucretia. I don't give a shit what anyone says, Sisters of Mercy wrote good music. I love Andrew's lyrics. I love their music. There isn't a Sisters track I don't like. I've been listening to them since I was 15 and I still feel the same as I did then.

Andrew has always banged on about Sisters not being a goth band. They're rock, according to him. Thing is though, he has come to epitomise the archetypal goth bloke. Must have right pissed him off. I reckon they're goth by most people's understanding of the genre. Which is, I feel, skinny whiny miserable people singing about death and dressing in black. So wrong. They're not all skinny.

And then Killing Joke came on. Bloody marvellous.

And then, rather bizarrely, Shakespear's Sister. I love 'em. LOVE them. Not sure they're goth in the strictest sense of the word, but who gives a shit. I modelled my 'going out to Death Culture at the Hummingbird  in Birmingham in 1992' on Siobhan: 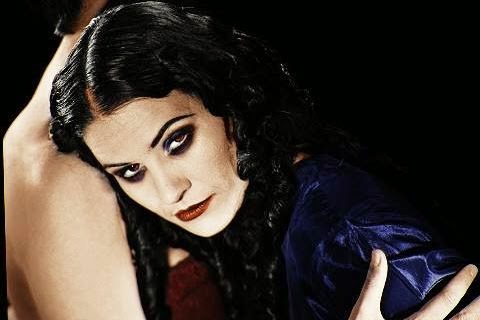 Never pulled it off quite as well but have been working on it ever since.

And then there were other bands like Marilyn Manson and I kind of lost interest.

BUT a show that squeezed in The Cure (with Robert reminding us all why we fancied him back in the day), Bauhaus, Killing Joke, Sisters, The Mission AND Siouxsie forced me to my realisation. I am a goth, therefore I am.

And now, if you'll excuse me I have to go and listen to This Corrosion loudly.

Email ThisBlogThis!Share to TwitterShare to FacebookShare to Pinterest
Labels: Bauhaus, Fields of the Nephilim., Goth at the BBC, Killing Joke, Shakespear's Sister, Sisters of Mercy, The Mission