Oscars: hot or not?

I fucking hate the Oscars. What an abysmally dull and facile depiction of the vacuous nature of Hollywood it is. With extra dresses. Don't forget about the DRESSES. Because who isn't transported into paroxysms of glee and frenzy by the fact that women wear DRESSES. And rich women wear expensive DRESSES. Some of the dresses are white. And some are black. And some aren't white OR black. But they're important enough to take up one million trillion column inches the next day.

I hate the speeches and the self congratulatory bullshit they all come out with. I hate the 'feminist' speeches at the altar of bullshit by people like Meryl Streep. Or was it Glenn Close. Whatever. Pretty sure they're the same person anyway.

I hate the red carpet 'interviews' and the rictus grins. I hate the fact the narcissitc 'jokes' by the host and the constant insistence that everyone in Hollywood are like super excellent friends. Look at these people, nay these heroes talking to each other almost like they're actual human beings. Some of them even are probably. But I bet my ass that most of 'em can't stand each other. It's a strange media construct, that all of the very rich and famous party with each other, and hang out like the cast of Friends.

I don't even watch the Oscars and yet all this I have absorbed. I know, for instance that people think Naomi Watts was badly dressed. That Scarlett Johansen's outfit was a 'miss'. That Jennifer Aniston shouldn't wear beige because her outfit was 'too beige' and that Anna Wintour always looks like the same sucked out corpse wherever she is.

The fact that legions of 'journalists' spend all of ten minutes compiling these lists of who looked 'hot' and who didn't is a mixture of disgusting, tedious and hilarious. I can imagine the state of some of these assholes who spend their time trying to convince us that beautiful women in expensive dresses are suffering some kind of malfunction, ScarJo, for example, looked absolutely smoking, even when John Travolta was licking her face, which I'm assuming felt as revoltingly reptilian as it looked, and yet I have seen at least three publications (including what used to be broadsheets) insist she looked shit.

Look at her. LOOK AT HER. How in the name of buggery bollocks can anyone be trying to attempt to say she looks anything other than polished and preened? And boobs. And dress. 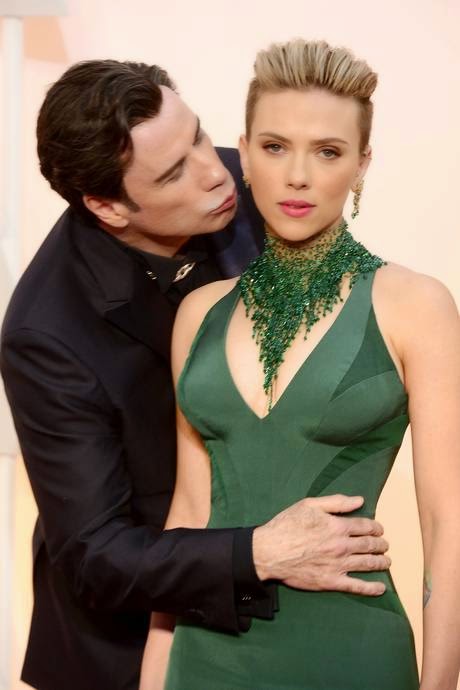 What a weird tradition. And it's not just a female thing - men get attacked or praised for what they're wearing. I mean, how did that even start? Why has it become such a thing? It's almost like the clothes matter more than the awards. Imagine. That.

And then the way that the winners act. Like they've been beatified. Like they actually now believe that they are a cut above the rest of the human race. It's a fucking statue because they acted in a film. Acting is, of course, an artistic discipline, but for the most part, none of these actors are doing anything that is particularly noble, or enlightening, or earth shattering or that will change anything. And yet the fucking self love that it perpetuates. All because they get paid millions to essentially dress up and pretend to be other people. Fucking MAD.

People will, as they always do, say to me: "Well don't watch it then you moaning killjoy arsebag." And I say to them. I bloody didn't watch it. I never do watch it. And yet because I am a human being and am on the internet a lot, somehow it has permeated into my consciousness to the point that I know that Rita Ora (who she?) wore a totally see through dress and the whole of America still doesn't know who the fuck she is.

So, yeah. Oscars. Facile, futile, dull, pointless narcissistic preening from a bunch of overpaid peacocks with more money than sense. Seems to me there is far more art out there worth absorbing than this bunch of dickbags.