Hey bitches. It's been AGES. AGES AND AGES. I just had a look at my last post and it was back in April and was about acceptance.

I feel the time is right to start talking rubbish on the internet again. More than Facebook allows me to. I like it. I had a small break, partly because, well, I'm a lot happier at the moment and that restricts my ability to rant in quite the same way. And partly because I see a lot of people write a lot of shit on the internet and I was all like, do I want to be a part of that? That total shitstorm of banal nonsense filling up our brainboxes to the detriment of actual thinking?

So it was lucky that I made a new friend today.

Now that I have found myself in a stable relationship (I know, right? Insanity. He doesn't even want me to be thinner or ANYthing. Or change anything about myself. It's quite the unknown territory. And quite marvellous) I am obviously not on dating sites. First time since about 1871. So I don't get all the weird SHOW ME YOUR VAJAJAY messages I used to get. 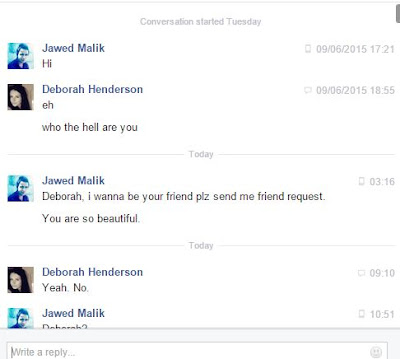 Don't engage. Don't feed the trolls. Don't encourage. But, but, but I'm working really hard and need a break and nothing's on telly and, look, I just did, OK? You wouldn't, I know. But I just wanted to see what Jawed wanted. What COULD JAWED WANT.

Well, he loves me. So there's that. 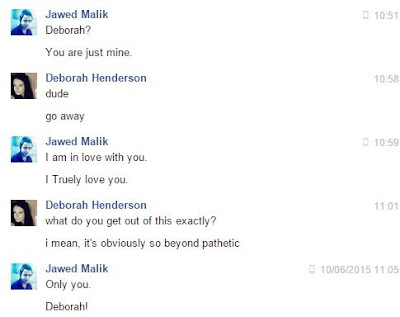 Jawed breaks my zen like calm here. I know it's pointless to get angry with jerkwads on the internet but I just can't seem to help it. I mean, this is a good 10 mins of my life I'm never getting back. But still it went on. I'm an imperfect human. Stop judging. 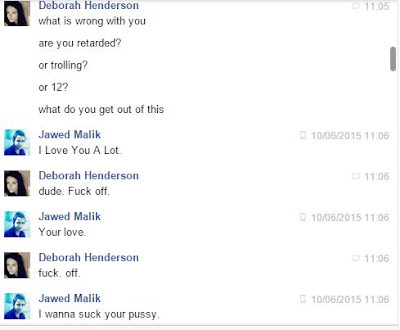 Ohhhh, Jawed wanted pics of my pussy. It's all clear now. Maybe he doesn't love me after all. I am glad that they know about Fatty in India though. He deserves to be a worldwide megastar. 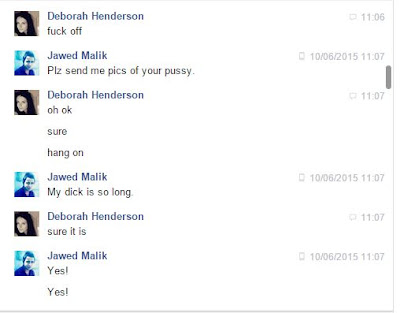 Not that kind of pussy, apparently. Change of tack. 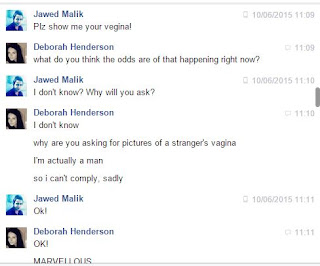 I mean, he's a student. I don't really get the whole spelling vagina with an 'e'. It doesn't even sound right. Who calls it a veh-gine-ah. Weird. Time for dick talk. 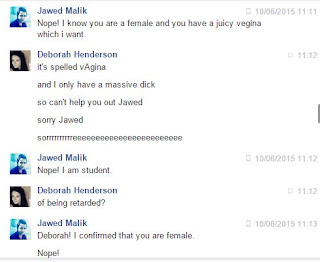 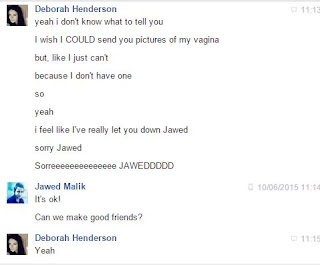 Yay. I made a new friend. 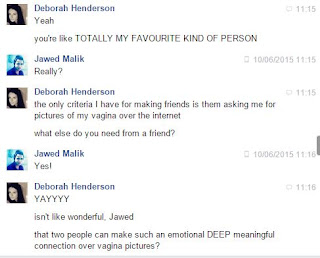 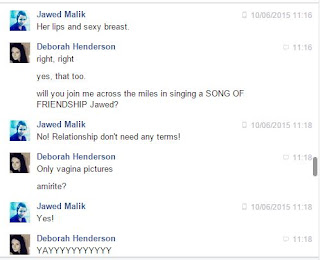 I sang. I don't know whether Jawed did. I feel like maybe he didn't. But I blocked him at this point so I guess we'll never know.