When I'm working at home I watch a lot of crap telly. Well, actually, I don't watch it but I do have it on. It means I have channels like Really on a lot. Yes, that is the name of an actual channel, for those who don't frequent the daytime airwaves. It has programmes on that include judges shouting at chavs, Jeremy Kyle shouting at chavs and chavs shouting at chavs.

In among these programmes there are many adverts, and in among those there are many, many, MANY charity adverts. It's as if the charity directors have decided that the people who are most likely to give money spend most of their day with the telly on, just waiting for an advert depicting starving children, orphan kittens or demented monkeys needing money.

My point is this. How do you choose? It's a fact that everywhere you turn people need stuff. They need money, they need help, they need medication, they need compassion. And then animals. They need food and they need shelter and they need protection (usually from humans). And then there's the rainforests and the orang utans. What are we meant to do? Us with our collective middle class middle England guilt?

Find one and stick to it is what I've decided. Even within my own small sphere of compassion (essentially animals) it becomes difficult to choose. I know so many people who work very hard to save animals in different ways. How do I choose who to give money to?

I don't, as it happens, have very much money. Since deciding that the corporate world is just not for me anymore, I've been eking a living using my skills to do all sorts of weird shit. This has meant I get by. I just barely get by. So this means I have to be careful when supporting charities. I have to make sure that my spare cash, such as it is, is going somewhere it's actually going to do some good, and in a way that pleases my blackened heart.

Dogs Trust gave me my Poppy dog in 1985 and have subsequently been the lucky recipient of a monthly donation from me ever since. It may not be much but it must have piled up by now. That's still ongoing. But my new one, the one I have selected is, perhaps unsurprisingly, the charity that gave me the love of my life.

Sushi has made me so happy and I can't quite believe how many things had to happen in order for me to meet her. Someone had to see her on the roadside, all smashed up, take her somewhere safe, keep her alive, make her better and get her details circulated so that someone else could take pity on her and advertise her. I had to see her and be in a position to send money to yet more people. Through a series of fortunate coincidences Sushi came to me.

But without Speranta Pentu Animale Sushi would be dead.

But she's not. She's here. And I love these people half way across Europe for giving her love and hope and care when she needed it.

They have dogs in their shelter in Craiova who are so damaged and so fucked up by the treatment they have endured - the abject actual suffering they have undergone - that they can never be rehomed. Yet, in a place where the state actively encourages people to kill animals without compassion, there are people who are giving their lives to help them live.

They have fuck all money, they work all the time, they get nothing for it, and somehow they have to feed and help these dogs.

They need sponsorship - and I know everyone has their own cause and their own reasons. I know people who think I'm batshit mental for giving money to dogs in a different country, or to dogs at all. But I know the money that I'm giving these guys will go directly to help the dogs I see on their Facebook page every day.

It won't get swallowed in admin costs. It won't disappear into a black hole of donations. It will literally keep Cream alive. Oh, this is Cream. She's my sponsor dog now. She may never end up being spoiled within an inch of her life like Sushi but she is safe and loved and with people who understand her fear and pain. 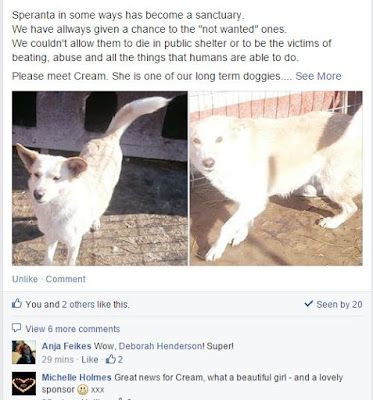 If you want to sponsor a Speranta dog (and there are a lot worse things you can do with your cash), Paypal to sperantapentruanimale@yahoo.com. You don't know who you could save.
Posted by thereseraquin at 20:48