How to deal with a British heatwave

I went out today when it was very hot. I left my ivory tower of wind caressed bliss and dipped my reluctant body into the swirling vortex of hot, soupy air. As I trudged on through the sticky heat, I reflected on what it is to be British in summer.

I breathed in the aromas of weed, dogshit and suntan spray thickly permeating the park I chose to walk through. Ahhh, summer I thought.

As it was the middle of the day the only people partaking of summer time pleasures are, of course, the self-employed (HIYAAA), the unemployed, the hugely old (apparently these are literally bussed in to Craggy Island all summer long. Hoards of them. If there actually was a zombie apocalypse there is a more than fair chance I wouldn't even notice for at least a week) and the too-young-to-be-in-school-but-apparently-old-enough-to-be-EVERYWHERE.

So I admit these top tips for surviving summer, as gleaned from those I witnessed on the hottest day of 2015 so far, could be skewed. But here goes:

1. ONLY GO OUT BETWEEN 12-4. This is the hottest part of the day. Experts handily tell you this all over the place. Something about avoiding it but obviously what they mean is to NOT avoid it. Not only not avoid it but make sure that you are standing in the full force of the unforgiving June sun's rabid glare at all times.

2. DON'T WEAR SUNSCREEN. That's for poofs. How are you going to get a good tan if you wear sunscreen? Skin cancer? Nah, mate. Not here. Doesn't happen on the Isle of Wight. We all have Teflon skin here. This is demonstrated by the fact that 78% of the men I saw today, during the hottest part of the day, had their tops off, tits out and sported the very latest in radioactive glow.

3. NO TOPS BETWEEN MARCH AND OCTOBER. It may be actually properly hot today, but it hasn't been for very long. And yet I have been lucky enough to catch long glimpses of all sorts of body types with their tops off. Some of the men I have seen look like prize turkeys, basting ready for Christmas. Proud, red bellies jutting out under their chins, glistening with the sort of rosy hue best seen on a well done roast chicken. It's particularly pleasant for people if you walk into any shop, restaurant, cafe, diner, pub or, well, anywhere you so choose, and wobble your flabby manbits in their faces while they try and eat. 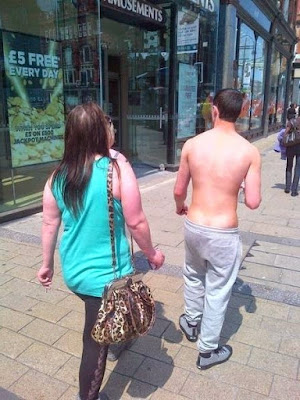 4. WALK YOUR DOG AT ANY TIME OF THE DAY. Even if the tarmac is too hot for you to walk on it, just continue to walk your dog on it. It'll be OK. And who cares if not eh? Oh, and don't forget not to bring water for your dog and to make it run a lot in the heat of the day. Don't forget also that if they get tired you can always leave them in the car.

5. NEVER REMOVE THE FAG. Part of the summer look du jour is the ubiquitous fag. Luckily there is plenty of beach on which to just chuck the ends, so you don't even have to move your fat, lobster coloured ass from the spot you're in before you can light up another.

6. BOOZE ON THE BEACH. It's well known that the best time of day to consume alcohol is between 12 and 2 in the full force of the sun. Best thing to do is camp out on the beach (don't forget to bring endless amounts of beach tat to mark your territory - a few deckchairs, a fridge, a games console, that type of thing), kick back and cane that beer/wine/WKD. Just keep drinking. It has liquid in it so definitely counts towards your two litres of water a day. If you drink enough you won't have to drink ANY water at all. Magic.

7. NEVER WEAR DEODORANT. You know you smell good, right? So everyone else should just deal with it. Even if you smell like a seven day old bottle of piss kept wrapped in a rug for 12 weeks, you do you and avoid washing.

8. GO AU NATURAL. Sweat actually cleans your hair eventually. It's true. I read it on the internet. When it's hot and you sweat you don't need to wash it properly. So just leave it and enjoy that sour earth whiff, particularly when on public transport. Everyone else has to.

9. SHARE THE WEED. Summer isn't summer without the constant whiff of pot. Make sure you share it with all and sundry by openly smoking your spliffs. If you have to smoke inside then all windows should be open for that authentic summer experience.

10. NEVER PICK UP DOG SHIT. If your dog hasn't died yet of heatstroke then it's likely to shit all over the shop. It's definitely not your responsibility and it is biodegradable so just leave it. It's particularly important to do this on very very hot days when lots of people are walking by as the scent is something enjoyed by all.

11. BLAST THAT MUSIC. Any time you travel in the car during the heatwave, you MUST blast out the shittest music known to man and drive slowly through built up areas. Think of it as giving the gift of you to the masses. Everyone's looking - and you know they're wishing they were you right now.

12. LET IT BURN. Remember, it hasn't been a good day if you haven't been left with very very prominent tan lines. Burn lines, really. The idea is to get a very white line against the livid purple of your damaged flesh - people really envy that sort of commitment to your tan. 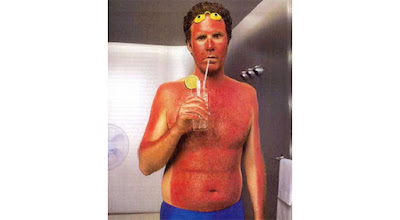 All in all, I'm pretty glad that our heatwaves last less time than the passable bit of Kanye's Glastonbury set and very soon I will be bathed in the grey, cold and damp of the British Autumn. Ahhhhh, bliss.