I remember vaguely when Facebook was fun. Way back in 2006 when we all edged our way away from our hilarious and ironic My Space profiles into the brave new world. It was all so simple then. We found our exes and stalked them. We added people we hadn't spoken to in years. We started ironically sharing statuses about our lunch.

Clearly, we were above this nonsense, but we were doing it anyway. We were banned at work before then being told it was the future of communication so we were unbanned at work. I should explain that work was a communications agency. It started to become important as a channel. An actual channel. For reals.

And then money. People started making money. Youtube channels and Twitter and Insta and Facebook all mixing into one confusing amalgamated whole screaming voice of rage and anger and neurosis and fear and LOOK AT ME.

And less than ten years later we're living in a real life dystopian future with a leader of the 'free world' chosen, elected and victorious thanks to his Twitter rants. Those statuses that you get warned about when you have a proper job. Doesn't apply if you're president apparently. The president can fracture and destroy democracy in 140 characters on a daily basis.

Social media isn't social anymore. Social media has arguably created a political crisis in the West. Social media has propagated fake news, given fascists and bigots a safe platform in which to vent, fed the gullible with ideas and allowed everyone to cultivate their timeline to just their preferences. Barely anyone I knew, at least openly, wanted to leave the EU. NO ONE I know supports Trump. And every time I stick my head above the parapet of my safe timeline, I'm shocked. All over again.

So every morning now when I wake up, the first thing I do is look at Facebook. Because it's not a social network now. It's a news network. It's an Armageddon newsfeed delivered in handy bite sized headlines interspersed with pictures of dogs and owls. It's a confusing place of fear and terror and such anger.

Every day I say I won't and every day I get into an argument with a Leaver, or a Trump supporter. Or a racist. Or someone who is laughing at people's distress. And I can't contain the rage. And I hate these people, I HATE them with the force of a thousand suns. Facebook has made me hate.

I stopped looking at Twitter when I dropped out of the video game industry last year. I don't like it. It doesn't interest me. It never hooked me like Facebook did. It didn't have the faux cosy parameters. It seemed like it was for people who liked networking and endless endless look at me jokes. And I hate networking. What kind of bullshit phrase is that anyway.

But now Facebook has sucked everything into its gaping maw of control, I don't need to look at Twitter to see people's Tweets. I see Trump's every day. So I wake up and I look. And I see that the orange dictator of doom, controlled by the spittingly vile Bannon and his Nazi policies, has done something heinous. Every single morning. So I feel sick instantly. And all day I feel sick. Images from Threads overlay everything I do and everything I see. By the way, if you are one of the lucky ones who hasn't seen Threads, I most definitely wouldn't recommend it in today's political climate. Not if you want to sleep again.

I have an anxiety disorder as it is. I have monumental battles again surges of adrenaline and anxiety on a normal day. On a day when it feels very strongly that we're inexplicably falling down a rabbit hole leading to the atrocities of the 1930s, it's threatening to spin out of control.

Watching this ever unfurling hate fest is breaking me down. It's making my natural nihilism worse. It's making me feel like there's no point in anything. We've gone the wrong way, through a looking glass we don't know how to control.

And let's face it, we are not cut out for an apocalypse. We can't handle it when WiFi goes down.

Should I stop looking at it? Will it make it easier if I don't see the train coming for me while I'm helpless on the tracks? Is that a better way to deal with it? Am I just being a hysterical libtard? I've been called all sorts recently, from a murderer (for being pro-choice), to a retard to, well, a hysterical libtard.

I hope that's what I am. I really do. Because if not, and my fear is real, then we're all fucked.

And can I extricate myself from the sticky embrace of the overwhelmingly rotten and negative that Facebook now is? Doubtful. Still, at least it gives me placards like this. 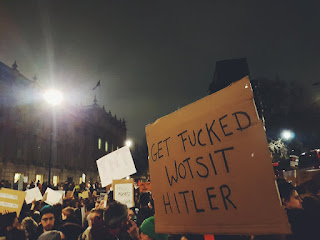