Bury your Parmesan while you can

Samuel Pepys was nails. Seriously. Read his diaries and you'll see he swanned around London during the 1665 plague. Not bovvered mate. People were being shovelled into mass graves every morning and he just nonchalantly strolled past and carried on eating chops and shit.

And then the Great Fire's flames licked the sides of his house before burning out. When the fire was already burning he thought he should probably do something. So he buried his cheese collection in his garden. And then probably leaned against a tree having a fag while daring the flames to actually touch him. He was probably immune to the bubonic plague, and the fire was just luck. He later survived having a tennis ball sized bladder stone being cut from his body by slicing his perineum with no anaesthetic. I mean look at him. Nails. 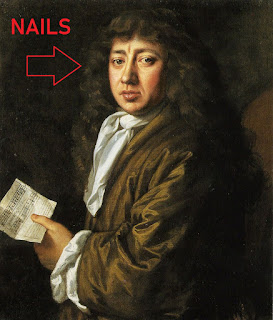 Anyway, basically, I wish he was in charge of the UK during the coronavirus pandemic. I wish anyone was in charge of the UK other than Alexander Johnson and his puppet master Cummings. Most of the panic happening right now is down to one thing: no-one trusts this government. We have a liar and a charlatan in charge. Someone who barely bothers to show up for work, and someone who organises 'emergency' Cobra meetings for the next day. After elevenses.

Someone who clearly just couldn't wait to be king and now is very put out he's expected to give a shit about a country of 66.4 million people. Two-thirds of whom hate his guts. And the other third presumably finally waking up to what they've done. Imagine only realising the Tories are a horrorfest when you're in danger of dying because of their inaction.

Because inaction it is. Anyone who believes this utter arse that Johnson is working on the (secret) evidence shown by (unnamed) scientists that is better in every way than anything that the World Health Organisation is desperately screaming at him from afar, I've got a vaccine to sell to you. He is stalling because he doesn't want to tank the economy. And every hour, every day and every week he stalls means more people will die in this country of preventable deaths due to this virus.

He lies. He's lied all the way through his career. He is a liar.

So when he says carry on as normal, don't.

When he says in a single press conference that everyone 'should avoid pubs and social gatherings and practice social distancing' while at THE SAME TIME keeping schools, colleges and non-essential businesses going, don't listen.

Work from home if you can. Change your social life. It won't be forever, but it must be for now. Don't go to the pub, don't for god's sake try and go on holiday, don't go to gigs even if they aren't cancelled. Keep your kids off school and keep in touch with your local community. Check on your neighbours, volunteer to help where you can, keep clean, keep safe and be careful.

Watch out for each other at a local level because the government is not interested in helping you.

And bury your Parmesan while there's still time.